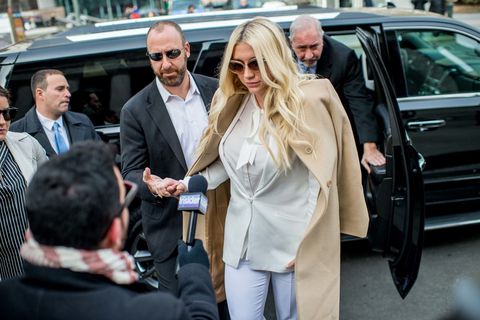 As the #FreeKesha movement gathers in protest outside its New York City headquarters Friday morning, Sony continues to not be able to do anything due to legal paralysis, the company said in a statement to the New York Times on Thursday.

"Sony has made it possible for Kesha to record without any connection, involvement, or interaction with Luke whatsoever, but Sony is not in a position to terminate the contractual relationship between Luke and Kesha," said attorney Scott A. Edelman. "Sony is doing everything it can to support the artist in these circumstances but is legally unable to terminate the contract to which it is not a party."

WTF? Translation: When Kesha was 18, she signed with Dr. Luke's Kemosabe Records, a subsidiary of Sony, meaning her contract belongs to Dr. Luke and is therefore his to terminate. There are definitely more issues at play here, as a source told People, but if he's got the decision-making power and is as nice a guy as he claims, shouldn't he have let Kesha go already?

Chelsea Peng I'm Chelsea Peng, the assistant editor at MarieClaire.com.
This content is created and maintained by a third party, and imported onto this page to help users provide their email addresses. You may be able to find more information about this and similar content at piano.io
Advertisement - Continue Reading Below
More From Celebrity
Meghan Markle Might Not Ever Go Back to the UK
Are Angelina Jolie and The Weeknd Dating?
Advertisement - Continue Reading Below
Kate and Will Ate Burgers With Their Kids
Meghan Markle's Handbag Was a Nod to Diana
Ben Affleck and Jennifer Lopez Made Out in NYC
Lady Gaga Stunned in an Old Hollywood Look
Olivia Rodrigo Looked Jaw-Droppingly Beautiful
Will's "Alleged Bullying" Drove the Sussexes Out
Sam Asghari Opens Up About Britney Documentaries
Prince Harry’s Memoir Is Concerning Royal Insiders