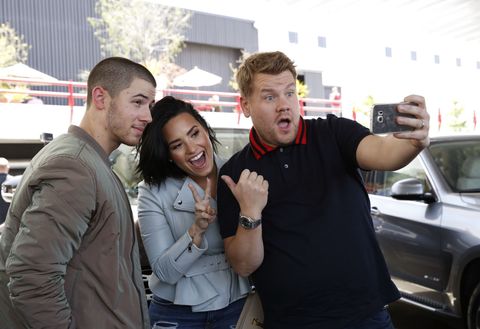 Let's travel back in time to the roaring aughts, when Nick Jonas had 99 problems and his lack of girlfriends definitely wasn't one. The former Jonas Brothers member chatted about his romantic past during Carpool Karaoke with James Corden and Demi Lovato, who mercilessly grilled him about his relationships with Selena Gomez and Miley Cyrus.

Honestly, the conversation can best be summarized by this awkward gif:

According to Demi (who called Nick Lies-a Minnelli, which we're totally stealing), her friend dated "Cyrus, Gomez, Cyrus, Gomez," before ditching his purity ring. "I had a real relationship with an adult and I fell in love actually," Nick said on the infamous ring. "I fell in love and decided it was time for me to take the purity ring off."

Other important moments include Corden asking Nick if he's ever been tied up (answer: yes), Nick admitting that Joe's new song is "about sex," and the trio forming a band called JCD ("which is not a sexually transmitted infection").