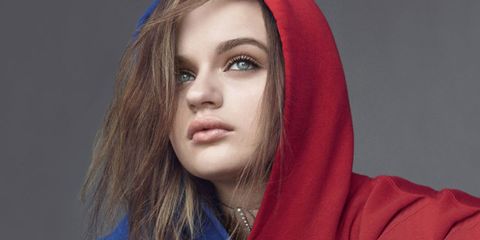 Sixteen-year-old Joey King has been acting for a decade—so yes, at the age when you were just starting to get into American Girl Dolls, she was making her TV debut. With *nine* new movies in the works—including the upcoming Independence Day sequel—she's only gaining steam.

Here, inside intel from the force to be reckoned with.

Rookie of the Year: In Smartass [stay tuned for the official release date], my character skateboards. So I took lessons at a skate park in Simi Valley, California, called Skatelab, and I just really loved it.

How's Tricks: I can do a front shove-it, which is where you rotate the board around underneath your feet. But I dream of grinding on a rail [skateboarding on a handrail].

Flying High: When I'm in the air, I'm either having a panic attack or I have total composure. There's no in between.

Girl's Girl: I have a beautiful, marbled skateboard by Girl Skateboards. It was so pretty at first, then I started destroying it, putting duct tape and stickers on it.

Free Fallin': During a break on Independence Day, I skated around with an assistant director and Liam Hemsworth. I did a trick and didn't land it, so I got up and kept going. The guys were like, "Joey, your knee!" I was bleeding, apparently.

Sk8er Boi: Usually when I go to my skate park, I'm the only girl there. It's a very intimidating setting. And I'm just like, "I know you think I'm a girl and I can't do it, but guess what? I can."

This article appears in the July issue of Marie Claire, on newsstands June 21.

This content is created and maintained by a third party, and imported onto this page to help users provide their email addresses. You may be able to find more information about this and similar content at piano.io
Advertisement - Continue Reading Below
More From Celebrity
Why Isn't Archie Mountbatten-Windsor a Prince?
A Body Language Expert on the Oprah Interview
Advertisement - Continue Reading Below
See an Adorable New Sussex Maternity Shoot Photo
Why Is the Royal Family Called "The Firm?"
Read Serena Williams' Statement on Oprah Interview
The Internet Reacts to Meghan and Harry Interview
Prince Harry: The Queen Was Advised Not to See Me
The Palace Had Concerns About Archie's Skin
Harry Says Racism Was "A Large Part" Of Leaving
Stacey Abrams on Her Election Wins & What's Next