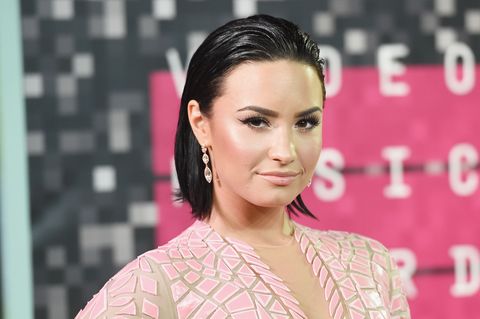 Demi Lovato's always been candid about her struggles with bulimia and addiction, but she just opened up in a whole new way. The singer tells American Way Magazine that she started self-medicating with alcohol, cocaine, and OxyContin after the success of Camp Rock, saying "I lived fast and I was going to die young. I didn't think I would make it to 21."

While filming the Disney special, Demi feared that she'd be the next Britney Spears or Lindsay Lohan, whose downward spirals were taking place right when her own star power was rising. "Making Camp Rock," she recalls, "I was definitely like, 'Oh crap. In three years, that's going to be me.'"

Demi also talked about her struggle with bulimia and self-injury, saying the images of skinny models she taped to her bedroom wall as a kid sent a confusing message:

"When I was gaining weight because I was becoming a woman, I would look at those images and say to myself, 'Wait, this is not what I look like. I'm getting fat on the hips and on my butt.'"

The star's mother and grandmother also had eating disorders, and she fears her own child will suffer from the condition.

"I'm nowhere near having children, but already I ask myself questions. My grandma had bulimia, my mom had it, I had it, and hopefully my kids won't have it, but it's kind of like addiction. It's hereditary."

Demi's currently sober and healthy—and while at times she's been "resentful for having that kind of responsibility," being an example to others holds her accountable. "When I have meet-and-greets, I can't tell you the amount of times that girls will show me their arms covered in scars or cuts," she says. "They'll tell me, 'You helped me get through this. Because of you, I stopped self-harming,' or 'I got sober.' Hearing those things gave my life new meaning."