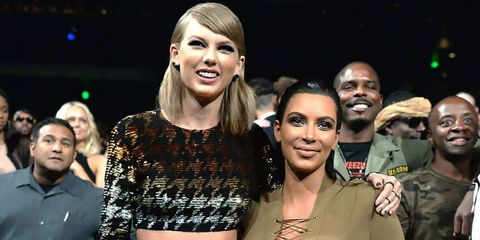 Remember when Kim Kardashian called out Taylor Swift and #FamousGate in GQ? Well Keeping Up with the Kardashians caught it all on camera, and it'll be one of the focal points of Sunday's episode.

To refresh your memory, Kim told GQ that a videographer caught Kanye and Taylor's conversation about "Famous" (more specifically the line "I made that bitch famous") and there's solid proof that "she totally approved that."

In a preview from Sunday's KUWTK, Kim tells her mom that she dropped some truth to the magazine. Weirdly, the preview aired directly after last week's episode, but mysteriously hasn't showed up on E!'s YouTube channel yet. But there's this thing called Twitter.

And then on Sunday Kim Kardashian is gonna gather Taylor Swift on her show lmao bad week to be a swift https://t.co/dmlMBiTOFS

"I did an interview for GQ," Kim tells a very worried-seeming Kris Jenner. She goes on to say, "I've had it with people blatantly treating my husband a certain way and making him look a certain way. And I'm gonna say how I feel...He really did wanna do the right thing."

So...can we all agree that Kim's referencing Kanye's issues with Taylor? This is what she ended up telling GQ during her interview:

"It was funny because [on the call with Kanye, Taylor] said, 'When I get on the Grammy red carpet, all the media is going to think that I'm so against this, and I'll just laugh and say, 'The joke's on you, guys. I was in on it the whole time.' And I'm like, wait, but [in] your Grammy speech, you completely dissed my husband just to play the victim again."

As the ancient proverb goes: pics (or in this case, video) or it didn't happen.