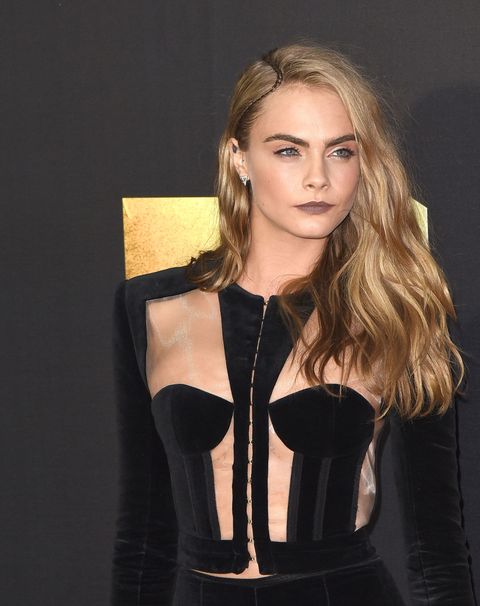 For her 14th piece of body art, Cara Delevingne had "BACON" inked onto her foot like Tyra Banks in Lifesize. Logically, you wouldn't have something that didn't have personal meaning permanently punctured into your body, but as she told it to Jimmy Kimmel during a recent appearance, "BACON" has even more behind it than we ever thought.

"Anything bacon is good, am I right?" she asked (rhetorically, because duh) after her host inquired if it was a reference to Francis Bacon or another porcine-named historical figure. "I think so. It's bacon colored—it's maroon, also. The 'dot, dot, dot'—it's an open-ended statement, it's not a question. It's just however you want to take it."

It is, however, *not* scratch 'n' sniff, much to the "I'm Not a Trophy" campaign star's chagrin. Someday, Cara. Someday.

Chelsea Peng I'm Chelsea Peng, the assistant editor at MarieClaire.com.
Advertisement - Continue Reading Below
More From Celebrity
Dolly Parton Will Read You a Bedtime Story
Prince Harry and Meghan Markle's 53 Cutest Moments
Advertisement - Continue Reading Below
RiRi Was Shocked by the Reaction to Fenty Beauty
Behold: Celebrities Who Dated Normals
Kate Middleton & Michelle Obama Use This $64 Cream
A Full Timeline of Tyler C. & Hannah B.
Blake and Ryan Donate $400K to NY Hospitals
Prince William May Work as an Air Ambulance Pilot
Harry Is Likely to Get U.S. Diplomatic Status
Harry Was Forced to Give Up His Military Titles