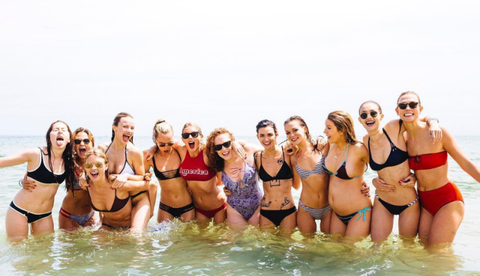 Remember when Taylor Swift threw her Fourth of July party and the internet literally could not deal? The event will doubtless go down in the annals of celebrity history as The Day Tom Hiddleston Wore a "I Heart T.S." Tank—but what went on behind closed doors? Pranks, apparently.

During an appearance on The Late Late Show, Squad Member Cara Delevingne said she teamed up with Ruby Rose and Uzo Aduba to prank Kesha and the Haim Sisters by "becoming a ghost crew." And it was a process.

"We waited until they went to sleep at around 4 a.m. [edit note: totally normal bedtime], told Taylor and Tom because security is massive, so we didn't want to get shot," Cara said. "You don't want to mess with those guys. You don't want Twiddleston on your ass. Obviously, I didn't want that, so we went and told them."

Turns out Kesha and Haim almost called the police thinking there was a real ghost, and Hiddleswift's night was disrupted in the process. "Taylor and Tom weren't there for the whole time, they got woken up," the model/actress continued. "And they came upstairs and Uzo was in the corner with a light in her hand, holding a speaker, I was throwing myself on the floor punching things....they were like 'I'm just gonna walk back downstairs, leave this scene'..."

As James Corden noted, Tom Hiddleston is The Night Manager, so you'd think he'd be all about this, but apparently not. To quote Cara, "he was just peeing himself in the corner."