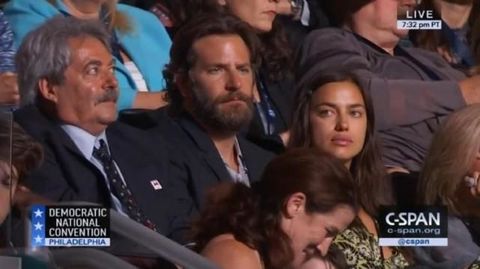 According to some Republicans' logic, when an actor who once starred in a movie with a possibly conservative bent directed by a known Republican attends a *Democratic* event, he then somehow betrays the entire party...by going...as himself. IDK either, and neither does Bradley Cooper, to whom this exact scenario happened IRL after he went to the Democratic National Convention last week.

"The Republicans were up in arms that I was there watching the president speak," he said mildly during Tuesday's James Corden, probably while his insides were like *eye roll*. He did laugh at fellow guest Todd Phillips' fire analogy—"which is like the Mob being mad at De Niro for being in The Intern"—though, so that counts for something.