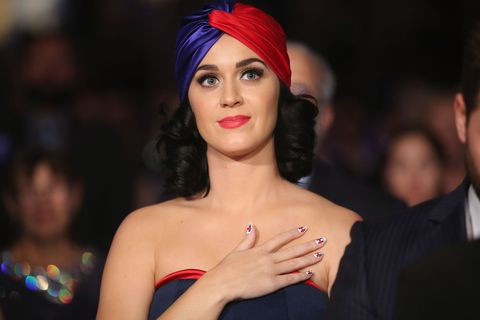 While everyone continues to be hypnotized by the tv show Catfish and the countless romantics just looking for digital love (but seriously, how does this keep happening?), Katy Perry reveals she's not here for it.

In an interview with SiriusXM's The Morning Mashup, Perry empathized with the catfish-ee who believed the two were in a long-term relationship. The victim, Spencer Morrill, went as far as having a custom engagement ring made for her with his grandmother's emerald and a diamond band.

"My heart goes out to him actually," she said. "I felt bad for him and so I didn't really like to indulge in that, because my heart would die."

Morrill believed he was dating the pop star for six years, but the relationship waned following his plans to pop the question. With the help of show host Nev Shulman, Morrill discovered he'd actually been communicating with a Katy Perry super-fan from England.

Perry also said she was unable to get through any coverage of the episode because she found the ordeal to be "really unfortunate and very sad."

Simedar Jackson I'm Simedar, an intern here at MarieClaire.com!
This content is created and maintained by a third party, and imported onto this page to help users provide their email addresses. You may be able to find more information about this and similar content at piano.io
Advertisement - Continue Reading Below
More From Celebrity
Beyoncé Stuns in a Mesh Dress With Matching Gloves
Lizzo and Chris Evans Had the Best IG Interaction
Advertisement - Continue Reading Below
Travis Shared PDA-Heavy Bday Tribute to Kourtney
How the Queen Ends Awkwardly-Long Handshakes
The Queen Has a Rule Against Bad Talking Family
The Queen Took a Pic of Philip With Her to Funeral
The Queen's Tolerance Was the Key to Her Marriage
J.Lo "Likes" Shady IG Post After A-Rod Split 👀
Beyoncé Shares Photos of Her White Power Suit
Will & Kate Welcomed Harry Back Into Their Group