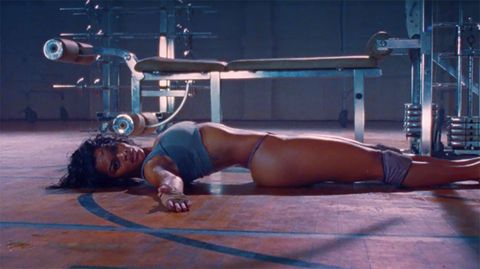 When they first laid eyes on Teyana Taylor during Sunday evening's premiere of Kanye West's "Fame" video, the world was first like "WTF is this cat business?" Then they were like "Is she real?" Days later, the mystery only deepens, as it is revealed that, to get that insane pneumatic body, Taylor eats sugar for breakfast and just dances. Also, she had very little lead time to get ready for the video.

"Dancing is my workout," Taylor said to E! News. "I just dance. I almost feel like dance is so underrated in the fitness world." Meanwhile, a source tells the outlet that "eating healthy is not her thing. She is the kind of girl that eats doughnuts and candy for breakfast. She just doesn't gain weight." So it's not like she would have changed anything *had she known the shoot was happening MORE THAN THREE WEEKS IN ADVANCE.*

Okay, new plan everyone reading this: We get a dozen crullers. (No jam-filled—yuck.) Then we dance like nobody's watching/we're genetically blessed enough for this to work for us too.