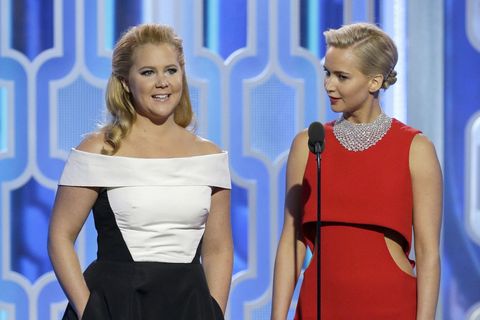 Amy Schumer and Jennifer Lawrence have one of the most enviable friendships in Hollywood. They're hilarious, they're writing a screenplay together. They're basically a two-woman squad.

So it's no wonder than when Amy Schumer was going through one of her darkest moments—after the Trainwreck theater shooting—Jennifer Lawrence was the one person who was able to cheer her up.

Speaking to Lena Dunham for Lenny Letter, Schumer got real about the personal responsibility she felt for the victims of the Trainwreck shootings.

"I mean, on paper it's like yes, of course, yes, you connect to that, two women were murdered, you know. But knowing it was my movie, and … that they went and they bought tickets and wanted to go see this movie, it just crushed me," she said. "I felt so powerless. And it felt a little bit like something that I had done, that there was a connection to me actually hurting people."

The one friend who knew the right thing to say? Jennifer Lawrence, of course. Lawrence texted Schumer a perfectly terrible joke.

"I didn't really know how to react. I was so upset, I watched the news that whole night, I was just f**king f**ked up by it," Schumer explained. "You know, that is actually when I felt the closest to Jennifer Lawrence, because that day she texted me, 'It's your fault.' And in times like that only jokes make you feel a little better."

The best friends know exactly what to say to make things better, even in the worst of times.

Kayleigh Roberts Kayleigh Roberts is the weekend editor at Cosmo, focused on celebrity news and royals.
This content is created and maintained by a third party, and imported onto this page to help users provide their email addresses. You may be able to find more information about this and similar content at piano.io
Advertisement - Continue Reading Below
More From Celebrity
Meghan Markle and Prince Harry Arrive in NYC
Kate Middleton Looked Radiant in Cream
Advertisement - Continue Reading Below
People Are Convinced Kylie Is Having a Boy
Kim Kardashian's Met Gala Ponytail Cost $10K
Megan Fox and Kourtney Posed for Sexy Skims Pics
Britney Spears Dedicated a Message to Her Sons
Meghan's Face "Lights Up" When Harry Walks In
Kate Middleton, Millennial, Wore Skinny Jeans
'Sex and the City' Star Willie Garson Dies Age 57
Princess Eugenie's Son Got to Meet Prince Philip