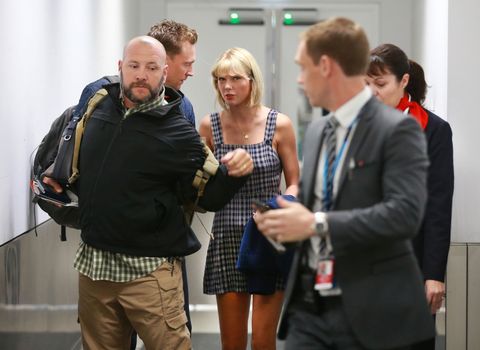 Remember when Matt Healy made that boneheaded comment about not wanting to date Taylor Swift because her superior fame levels would threaten his masculinity? Looks like he's not the only one.

Reports say that Hiddleswift is on the rocks as he worries he's acting as her "glorified escort," while she's paranoid he's using her to further his career. "Tom's need for their relationship to be so public so quickly makes her uncomfortable," a source said to the Daily Mail. "She tried to be okay with it in the beginning but fears he is in love with the idea of her and not falling in love with her for the right reasons."

A legitimate concern, given how before June—or even that Met Gala video—the non-BBC-watching world was like, "Tom Hiddle-whata?" It's just funny how the other half of the story always stays the same.

Chelsea Peng I'm Chelsea Peng, the assistant editor at MarieClaire.com.
This content is created and maintained by a third party, and imported onto this page to help users provide their email addresses. You may be able to find more information about this and similar content at piano.io
Advertisement - Continue Reading Below
More From Celebrity
Prince Harry Remembers Prince Philip
Prince William Statement on Prince Philip's Death
Advertisement - Continue Reading Below
Meghan and Harry Are Facing Security Threats
Selena Gomez Is Drenched in Fake Blood on Set
Amanda Seyfried Talked About Having Panic Attacks
Harry Arrives in the U.K. For Philip's Funeral
Matthew Perry Deletes 'Friends' Reunion Instagram
The Queen's Corgis Are Helping Her With Her Grief
Charles is Looking Forward to Seeing Harry Again
Will & Harry to Walk Together at Philip's Funeral