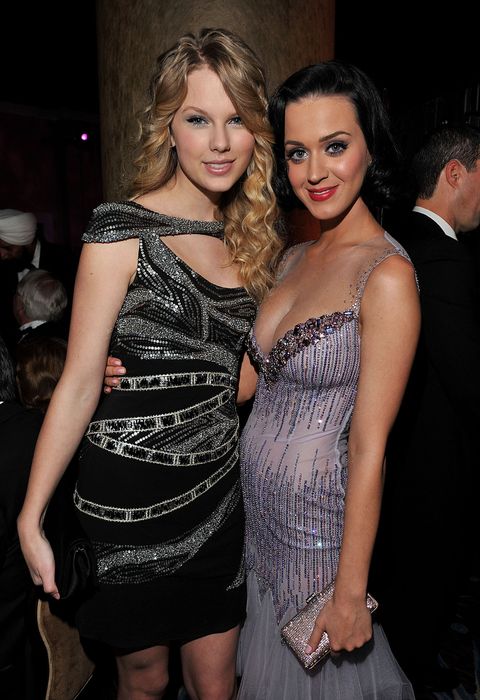 While waiting for her Cheesecake Factory delivery order to arrive yesterday, Katy Perry appears to have spent some time chatting with fans and trolls on Twitter. While shooting down their insults with dry humor and answering questions left and right, she shared one surprising fact: exactly what it would take for her to squash her epic beef with Taylor Swift.

ICYMI—which HOW?—Perry and Swift were friends before drama over backup dancers sparked their fallout.

Swift made their feud public in 2014 saying to Rolling Stone, "For years, I was never sure if we were friends or not," of a person widely speculated to be Perry. "She would come up to me at awards shows and say something and walk away, and I would think, 'Are we friends, or did she just give me the harshest insult of my life?' [Then] she did something so horrible. I was like, 'Oh, we're just straight-up enemies.' And it wasn't even about a guy! It had to do with business.

"She basically tried to sabotage an entire arena tour. She tried to hire a bunch of people out from under me. And I'm surprisingly non-confrontational—you would not believe how much I hate conflict. So now I have to avoid her. It's awkward, and I don't like it."

Watch out for the Regina George in sheep's clothing...

Fans were quick to speculate yesterday that Perry had been hacked when she gave that just-say-sorry solution. She had this response:

Perry first extended an olive branch to Swift this February when she invited Swift to her Grammys pre-party (one co-hosted by Spotify, making it unlikely Swift, who very publicly criticized and took her music off the platform, would attend).

When Calvin Harris, Taylor Swift's ex-boyfriend, tweeted that infamous "don't bury me like Katy etc" line in July, Perry jumped in with these:

All of Taylor Swift\'s Feuds

Alyssa Bailey News and Strategy Editor Alyssa Bailey is the news and strategy editor at ELLE.com, where she oversees coverage of celebrities and royals (particularly Meghan Markle and Kate Middleton).
This content is created and maintained by a third party, and imported onto this page to help users provide their email addresses. You may be able to find more information about this and similar content at piano.io
Advertisement - Continue Reading Below
More From Celebrity
Zendaya Looked Incredible at the 'Dune' Premiere
Kate Middleton Is Helping Tackle Addiction
Advertisement - Continue Reading Below
The Queen Was Advised to Stop Drinking for Now
Scott Disick Is "Not Happy" for Kourt and Travis
Emma Watson Stunned at the Earthshot Prize
Kate "Didn't Have Much Energy to Bond" With Meghan
Blake Lively Trolled Ryan Reynolds Again
Kourtney Kardashian and Travis Barker Are Engaged!
See Kate Middleton's Subtle Environmental Look
Prince George "Adored" Seeing Dinosaur Fossils