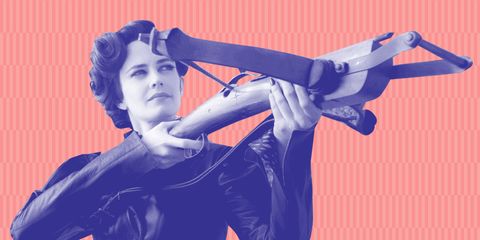 Not to be dramatic, but Miss Peregrine's Home for Peculiar Children is Tim Burton's best movie since Edward Scissorhands (that's right, I went there), and that's in large part thanks to Eva Green. The Parisian actress nails her titular performance as the quick-talking headmistress, so it's no surprise that she's been dubbed Tim Burton's new muse. But is she ready to take the mantle from Winona Ryder and Helena Bonham Carter?

MarieClaire.com sat down with Green at the ultra-atmospheric McKittrick Hotel and talked about all things Miss Peregrine, whether she thinks the world is ready for a female James Bond, and her decision to work with controversial director Roman Polanski.

Marie Claire: You recently mentioned wanting to get away from scripts that describe the female lead as a "beautiful, mysterious woman." Do you feel Burton gives you the opportunity to subvert typecasting?

Eva Green: In a Tim Burton movie, you know it's going to be something unusual, or a bit mad. Something "other." The characters are many-layered. I've never played a character that is just beautiful, but sometimes you can read scripts that sound so shallow, like women are objects. I've never done something like that, though.

MC: This film celebrates difference. Have you had personal experiences of outsiderdom?

EG: I've always felt a bit weird, very shy. Like, I can't believe I'm here giving interviews and doing stuff like this—it's so surreal. I've never been very good talking about myself. I'm very proud of this movie and of course I want to promote it, but it's kind of paradoxical. I've always felt like I'm from another planet.

MC: I saw a really interesting article reading the film as an allegory for Syrian refugees. There are also many allegories to be made about bullying. What do you make of the film being a lens to discuss these important social topics?

EG: I think everybody will imagine their own thing. In the novel it was quite obvious that the Peculiars were the Jews and the Hollows were the Nazis. It's more like a generic message—don't be ashamed of who you are, embrace who you are. And if you're weird, it's good to be weird. It's boring to be like everybody. I love that.

MC: You've been described as Tim Burton's new muse—does that put pressure on you, or do you embrace it?

EG: It's kind of a big responsibility. Of course, I'm very flattered he asked me to be a part of his adventure—but I find this word a bit intimidating. It's scary.

MC: What draws you to the fantastical worlds Burton creates? Is there a sense of escapism you search for when picking movies?

EG: Of course, it's a Tim Burton movie so full stop I would do anything. But at the end of the day, I choose something that makes my heart beat, that I can relate to, that's very complex, or human. Miss Peregrine's is a fantasy-adventure; it has striking moments and you escape for a little while—but also it makes you think and it's very human.

MC: You were a Bond Girl. As someone who's been involved in the franchise, do you think the world is ready for a female Bond? There's been a lot of chatter about the possibility.

EG: I think if it's a woman it would be a different thing. They could do a movie about a spy woman and all this, but I think Bond...I mean, call me old-fashioned, but I think he should remain a man.

MC: Strange question, but you are never without your giant silver skull ring. What does it symbolize to you?

EG: It's weird, it's funny. It's kind of a cheap ring that I bought in Paris. When I did The Dreamers I left it in a bathroom at a hotel. It's a bit stupid when you're superstitious and you lose your lucky stuff, but I panicked. I went all the way back and found it. All my jewelry has stories.

MC: You're slated to star in Roman Polanski's new film. What drew you to the project? I wanted to ask about making the decision to star in a movie made by someone so controversial.

EV: I just thought it was a very good role, and there are not many good roles for women. It's a very intense story, it was inspired by a French best-seller. He's done fantastic movies and I just see him as an artist. Then the man, I don't want to get in there— it's a different thing and I don't really know him. I'm just working with a great artist.

Mehera Bonner Contributor Mehera Bonner is a news writer who focuses on celebrities and royals.
This content is created and maintained by a third party, and imported onto this page to help users provide their email addresses. You may be able to find more information about this and similar content at piano.io
Advertisement - Continue Reading Below
More From Celebrity
Charles Expertly Ignored Boris Johnson's Snafu
How Kitty Spencer's Wedding Dress Honored Diana
Advertisement - Continue Reading Below
Dolly Parton On the #FreeBritney Movement
Will & Kate Are Nervous About George's Future
George Won't Be Forced to Go to Boarding School
Diana Would Have Written a Memoir Too, Friend Says
A Slice of Diana's Actual Wedding Cake Is For Sale
Matt Damon Trolled Ben Affleck and Jennifer Lopez
This Old Video of the Queen Saying "Nah" Is LOL
Diana Had a Secret Message on Her Wedding Shoes