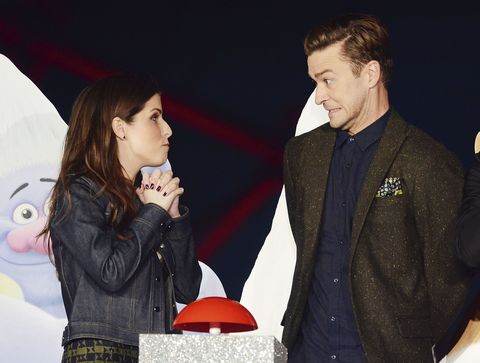 Justin Timberlake and Anna Kendrick are two of the coolest humans on the planet—which makes their epic fail at the Trolls premiere in London even more adorably awkward.

The two stars were supposed to light the iconic London Eye up in rainbow colors in honor of their new animated feature—"supposed to" being the key phrase. According to The Huffington Post, things did not go according to plan.

The setup was great; they had a big red button and everything. Timberlake and Kendrick took their places, did the obligatory countdown, and got the crowd excited.

But when it came time to push the button...nothing happened.

"And all the power goes out," Timberlake joked. He even lifted the pedestal the button was on, looking for what had gone wrong.

And he just. Kept. Hitting. The. Button. It was cute and then sad and then so sad it became cute all over again.

Eventually, the technical crew fixed the glitch and the Eye was lit up in full rainbow Trolls glory.

Timberlake and Kendrick were so adorably awkward, it was totally worth the wait.

Kayleigh Roberts Kayleigh Roberts is the weekend editor at Cosmo, focused on celebrity news and royals.
This content is created and maintained by a third party, and imported onto this page to help users provide their email addresses. You may be able to find more information about this and similar content at piano.io
Advertisement - Continue Reading Below
More From Celebrity
Alicia Silverstone Got Banned From a Dating App
The Queen Just "Reluctantly" Canceled a Trip
Advertisement - Continue Reading Below
Adele's Album Will Feature a Sensitive Voicemail
Selena Gomez Just Debuted a Sleek Bob
Zendaya Looked Incredible at the 'Dune' Premiere
Kate Middleton Is Helping Tackle Addiction
The Queen Was Advised to Stop Drinking for Now
Scott Disick Is "Not Happy" for Kourt and Travis
Emma Watson Stunned at the Earthshot Prize
Kate "Didn't Have Much Energy to Bond" With Meghan