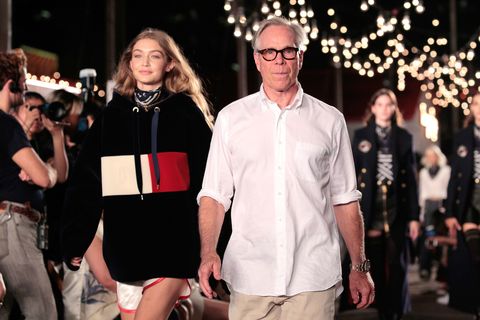 Tommy Hilfiger caused some unintentional side-eyes when chatting about Gigi Hadid, but there's more to his quote than meets the eye.

The designer originally implied that Hadid wasn't thin enough to wear some of the designs in his Fall show, telling YahooStyle, "Our casting director said, 'She doesn't really fit because, you know, she's not quite as tall as the other girls, she's not quite as thin.' So they put a red, white, and blue poncho on her. It covered a lot of her body, unfortunately, but it received millions of hits."

Hilfiger has since clarified his comment, saying he was distressed by the casting director's choice to cover Gigi's body, and that she is "perfection."

"The casting people put Gigi in the poncho, and I was not happy. I was saying, 'Don't hide her body.' Even though the poncho ended up being the best-selling piece, I was very unhappy. The suggestion that I thought she wasn't thin enough upsets me to no end. Gigi is the epitome of perfection."

Hadid has been upfront about the fact that her body is more muscular than typical on the runway, and even wrote a statement saying she's proud of her curves.

Mehera Bonner Contributor Mehera Bonner is a news writer who focuses on celebrities and royals.
This content is created and maintained by a third party, and imported onto this page to help users provide their email addresses. You may be able to find more information about this and similar content at piano.io
Advertisement - Continue Reading Below
More From Celebrity
Meghan and Harry Shut Down Their UK Charity
Naomi Campbell Is a First-Time Mom
Advertisement - Continue Reading Below
Ariana Grande Got Married Over the Weekend
Ariana Grande Quietly Married Dalton Gomez
Joie de Tracee
Jennifer Lopez and Ben Affleck: Everything We Know
Harry & Oprah's Mental Health Doc Has a Title
Serena Williams Might Miss the Tokyo Olympics
Jennifer and Ben Have "Unreal" Chemistry Together
The Sussexes Marked Archie's Bday in a Lovely Way