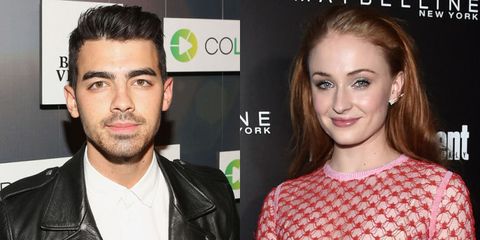 Joe Jonas and the rest of DNCE have been in Europe for a couple of weeks now promoting their debut album (out November 18), but what people have really been noticing about DNCE's stint on the other side of the ocean is the nearly-constant presence of Game of Thrones star Sophie Turner. Because, guys, she's been hanging out with DNCE a lot. More specifically, she's been hanging out with Joe Jonas a lot.

And, because we live in the age of the internet, there's all kinds of photographic proof.

Here she is celebrating Halloween with Joe and company:

Here she is being photobombed by Joe and Cole Whittle:

And again, this time as she posed with fans:

And then there are these pictures of them in Rotterdam (where Joe and DNCE are performing at the MTV EMAs), where they look downright couple-y:

Sophie has clearly been supporting Joe (whether as a friend or something more), so here's hoping that next we get some amazing pics of him on the Game of Thrones set...preferably in a big, furry Night's Watch coat, representing the North.

Kayleigh Roberts Kayleigh Roberts is the weekend editor at Marie Claire, covering celebrity and entertainment news, from actual royals like Kate Middleton and Meghan Markle to Hollywood royalty, like Katie Holmes and Chrissy Teigen.
This content is created and maintained by a third party, and imported onto this page to help users provide their email addresses. You may be able to find more information about this and similar content at piano.io
Advertisement - Continue Reading Below
More From Celebrity
See Inside Gigi Hadid's Baby's Room
Irina Shayk Just Shared a Jaw-Dropping Selfie
Advertisement - Continue Reading Below
Apple's Hilarious Reaction to Gwyneth's Nude Photo
Chrissy Was Hospitalized For Excessive Bleeding
Jordyn Woods Talked About Being Publicly Shamed
Kate Middleton Stuns in a Sustainable Denim Dress
Sophie Turner Shared Her Personal Pregnancy Pics
Gwyneth Paltrow Poses Nude on Her 48th Birthday
The Queen Fired a Nanny Who Tried to Overrule Her
Gigi Hadid Apparently Gave Birth on a Farm