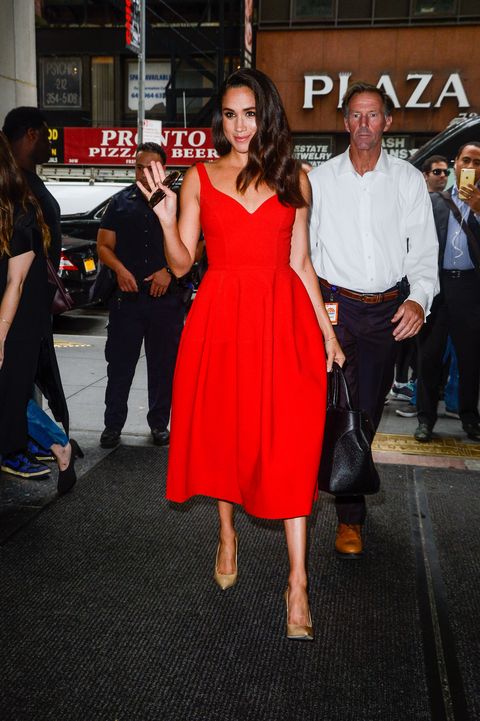 Parents excluded, there is perhaps no harsher critic of one's significant other than one's older sibling. And when one's older sibling is a duke and second in line to the throne, you better believe he'd be real hard to please. JK—Prince William was reportedly chill about meeting Meghan Markle.

According to a source speaking with Us Weekly, Prince Harry introduced his big bro to the Suits star and philanthropist while she was staying at Kensington Palace last week. (She's already met Papa Chuck, FYI.)

"They got on fabulously," the insider said. "I'm sure Harry had been looking forward to introducing his girlfriend."

Frequent flying, strongly worded statements from the Palace to trolls being like "back OFF," and now this—"serious" relationship indeed.

Chelsea Peng I'm Chelsea Peng, the assistant editor at MarieClaire.com.
This content is created and maintained by a third party, and imported onto this page to help users provide their email addresses. You may be able to find more information about this and similar content at piano.io
Advertisement - Continue Reading Below
More From Celebrity
Kate and William Holiday In Cornwall
Blake Lively Wears a Pink Sequin Dress
Advertisement - Continue Reading Below
Meghan Markle Hangs Out With Melissa McCarthy
Simone's Boyfriend Sent Her the Sweetest Message
What Happens on Katie's Season?
Rebel Wilson Recreated This Britney Spears Look
Jennifer Lopez Flew Back From European Getaway
Jennifer Lopez Wears Old Bracelet From Ben Affleck
Simone Biles Cheers on MyKayla Skinner
See the Royals Socialize at a 1991 Cocktail Party