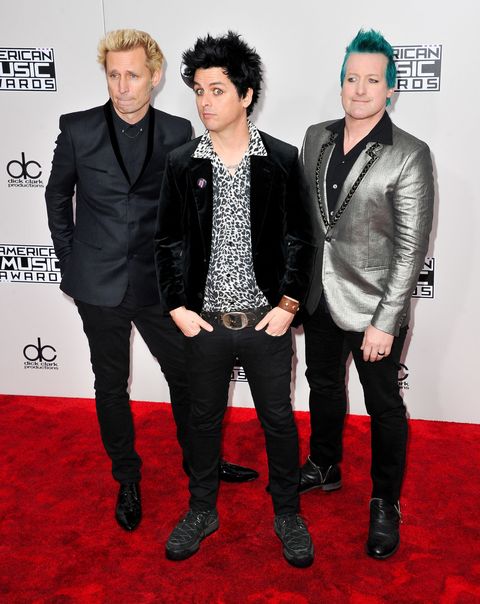 In a playlist for the end of the world, you might include loads of of Elliott Smith. You might also include Green Day's new single "Bang Bang," which Billy Joe Armstrong turned into a boisterous anti-Trump protest at Sunday evening's American Music Awards.

Following their performance at the EMAs, during which the band changed the lyrics in "American Idiot" to say "subliminal mind-Trump America," Green Day struck out again at the president-elect, chanting "No Trump, no KKK, no fascist USA!"

Final answer, re: apocalyptic soundtrack: Definitely "American Idiot," which a lot of other people reportedly started streaming after the election too.

Chelsea Peng I'm Chelsea Peng, the assistant editor at MarieClaire.com.
This content is created and maintained by a third party, and imported onto this page to help users provide their email addresses. You may be able to find more information about this and similar content at piano.io
Advertisement - Continue Reading Below
More From Best of the Red Carpet 2021
Alan S. Kim Channeled David Rose at the Oscars
The Best Red Carpet Looks at the 2021 Oscars
Advertisement - Continue Reading Below
The Best-Dressed Celebs at the 2021 SAG Awards
The Best Red Carpet Looks at the 2021 Grammys
The Chicest Golden Globes Looks From IRL and Home
50 Celebrities on Their Very First Red Carpet
The Best Looks of the Oscars After-Parties
Did You Spot Charlize Theron's Hidden Hair Detail?
Timmy Photobombed Margot on the Oscars Red Carpet
Leonardo DiCaprio's Oscars Date Is...Not His Mom