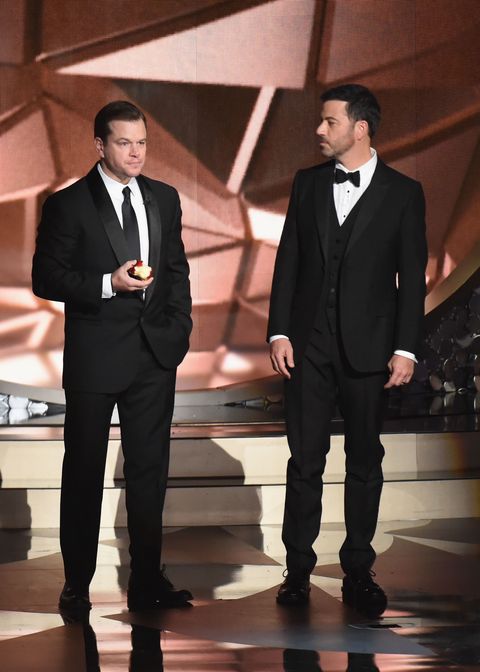 Matt Damon and Jimmy Kimmel have been in a "feud" for 11 years now, and the Oscars proved that things are still going strong—in the form of pure, unadulterated trolling, of course.

First, in Kimmel's opening monologue, Damon got a shoutout.

"Matt did something very unselfish and I wanted to commend him for it," Kimmel said. "He could have starred in Manchester By The Sea but he didn't: he gave that role to childhood friend Casey Affleck, and made a Chinese ponytail movie instead. That movie went on to lose $80 million dollars. Smooth move, dumbass."

Then, in a series of videos in which Hollywood stars looked back at their favorite movies, Kimmel took a satirical spin by looking at Damon's We Bought a Zoo. "You can see him working. It's so effortful," Kimmel says about Damon's performance.

Later, as Damon took the stage to present (after being announced alongside longtime friend and collaborator Ben Affleck as a "guest"), music played every time he opened his mouth. "Are you playing me off? Seriously?" Damon says, before the camera goes to Kimmel conducting the orchestra. "Wrap it up! We want to go home!"

Samantha Leal Senior Web Editor I'm Sam, the senior editor at MarieClaire.com.
This content is created and maintained by a third party, and imported onto this page to help users provide their email addresses. You may be able to find more information about this and similar content at piano.io
Advertisement - Continue Reading Below
More From The Oscars 2021
Twitter Is Not Happy With How the Oscars Ended
Glenn Close Dances to "Da Butt" at the Oscars
Advertisement - Continue Reading Below
‘Ma Rainey’s Black Bottom’ Oscar Makes History
The Oscars Were All About the '90s Midriff
Alan S. Kim Channeled David Rose at the Oscars
How Daniel Kaluuya's Mom Reacted to His Speech
Carey Mulligan Is a Gold Goddess at the Oscars
Riz Ahmed Put Every Husband to Shame at the Oscars
The Best Red Carpet Looks at the 2021 Oscars
How to Watch or Stream the Oscars