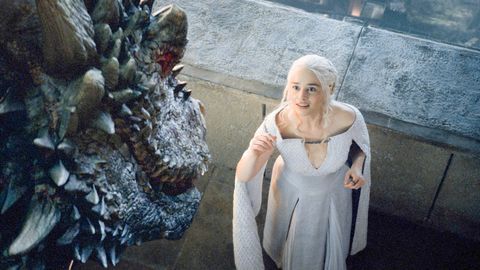 For six years, Game of Thrones fans have been able to look forward to a glorious day in spring (usually in April, but once at the very end of March) when we could once again travel to Westeros.

But nothing about Game of ThronesSeason 7 has been typical—it will be shorter than previous seasons, with seven episodes instead of the usual ten, and all we've known for a very long time was that it wouldn't premiere until "mid-2017."

Now, HBO is finally ready to drop news about the new season. Not only did they roll out a new poster, they posted a teaser on Facebook promising the reveal of Season 7's premiere date. We had to watch the excruciatingly slow process of ice melting to get it (eye-roll), but here's what we found out:

Also, get excited because HBO shared a brief sigils tease. It's short, but definitely sweet.

Clear your calendars, start your countdown, plan your premiere parties, and generally allow yourself to start feeling excitement about television again. Season 7 is coming.

Kayleigh Roberts Kayleigh Roberts is the weekend editor at Marie Claire, covering celebrity and entertainment news, from actual royals like Kate Middleton and Meghan Markle to Hollywood royalty, like Katie Holmes and Chrissy Teigen.
This content is created and maintained by a third party, and imported onto this page to help users provide their email addresses. You may be able to find more information about this and similar content at piano.io
Advertisement - Continue Reading Below
More From Celebrity
See Blake Lively's *Impressive* Watermelon Cake
Prince Charles Cant Deal with Harry's Criticisms
Advertisement - Continue Reading Below
Serena Gave Daughter Olympia a Tennis Lesson
Meghan Shared What Helped Her Through 2020
Kylie and Travis Are "Very Close" After Reuniting
Meghan's Book 'The Bench' Tops Best Sellers List
Kaavia Talks to a Bee in an Adorable IG Video
David Harbour on Being Stepdad to Lily Allen's Kid
Ben Affleck Is "Getting to Know" J.Lo's Kids
Salma Hayek's Owl Had a Mishap With Harry Styles