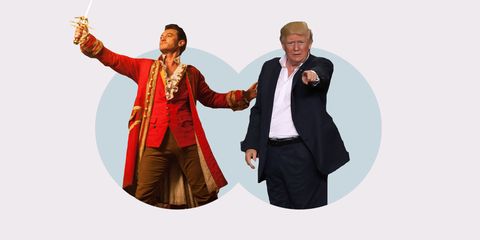 Just like it was back in 1991, the new Beauty and the Beast is a heartwarming movie about a girl who falls in love with a giant dog. It'll make you smile, cry, and wonder why you're vaguely attracted to a human-animal hybrid. But one startling difference between the new Beauty and the Beast and its predecessor is that 2017's version came out in the golden age of Donald Trump. (Golden because he's obsessed with gold, obviously.)

"It's interesting who he reminds people of when they watch the film...the hair's quite large, too."

The plot of this film screams escapism (there's literally a talking candle, how much further from reality can one get?) but—not to get all serious—it's also a metaphor for what happens when we give into materialism and abandon our core values. Sure, the Beast learns his lesson and finds redemption after turning his back on a poor woman (a refugee seeking help, if you really want to take this to the next level), but Gaston does not. He's too busy being a terrifyingly accurate—though probably unintentionally—metaphor for Trump. Just ask Luke Evans.

"Gaston's basically just a big 'ol idiot who's not used to being told no," the actor told MarieClaire.com, adding with a pointed smirk, "There's a lot of people like that. Who don't like the world 'no.' They like to be everybody's idol and when they don't get that, they start to show their true colors. It's interesting who he reminds people of when they watch the film...the hair's quite large, too."

While there are certainly differences between Trump and Gaston, what's really glaring here are their similarities. Both are men consumed by their egos, who aren't used to being told no, who manipulate their public, and above all, who crave approval. "He just loves himself. He's a narcissistic nefarious human being," Evans said of his character while images of Trump popped into my head. "He lives in a tavern surrounded by hand-painted murals of his conquests."

And then there's the whole "sexual predator" thing. While Gaston doesn't go quite as far as Donald Trump (read: he doesn't advocate grabbing women by the pussy sans consent), he obsesses over Belle in a predatory way, viewing her as an prize to be won instead of a human with agency. When asked about Gaston's predatory vibes, Evans said he "wouldn't dispute" them, but hoped to add an element of complexity.

"I didn't want him to just come off as a sexual predator, I wanted him to come off as somebody who basically never got told 'no.'"

"I didn't want him to just come off as a sexual predator, I wanted him to come off as somebody who basically never got told 'no,'" Evans explained. "I don't think he's ever going to do anything bad to her. I don't think that's who he is. But under the surface when he gets told 'no,' he realizes if he cant have her no one can have her. So he goes about ruining her life. You do see the real monster in the film ends up being Gaston. He's a man who completely loses himself with obsession."

These are the classic actions of a megalomaniac—the thing is, Gaston is relegated to a movie screen. The same can't be said for Trump.