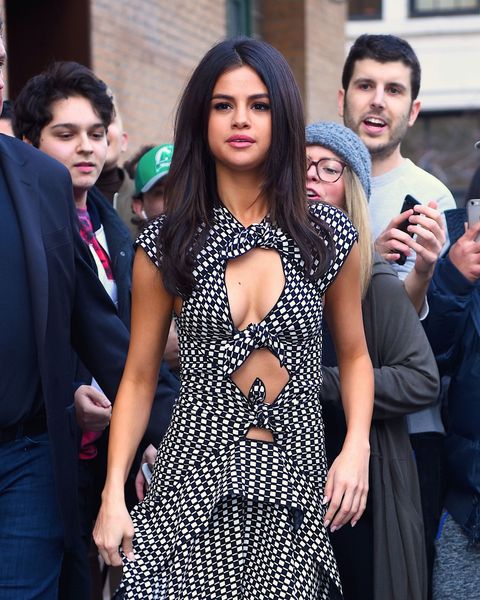 Selena Gomez made headlines when she unexpectedly canceled her tour in August, flew to Tennessee, and entered a rehab facility. Now, the pop star is opening up about her decision (and the depression and anxiety that lead to it) in a new interview with Vogue.

On Quitting Her Tour

"Tours are a really lonely place for me. My self-esteem was shot. I was depressed, anxious. I started to have panic attacks right before getting onstage, or right after leaving the stage. Basically I felt I wasn't good enough, wasn't capable. I felt I wasn't giving my fans anything, and they could see it—which, I think, was a complete distortion. I was so used to performing for kids. At concerts I used to make the entire crowd raise up their pinkies and make a pinky promise never to allow anybody to make them feel that they weren't good enough. Suddenly I have kids smoking and drinking at my shows, people in their 20s, 30s, and I'm looking into their eyes, and I don't know what to say. I couldn't say, 'Everybody, let's pinky-promise that you're beautiful!' It doesn't work that way, and I know it because I'm dealing with the same shit they're dealing with. What I wanted to say is that life is so stressful, and I get the desire to just escape it. But I wasn't figuring my own stuff out, so I felt I had no wisdom to share. And so maybe I thought everybody out there was thinking, 'This is a waste of time.'"

"You have no idea how incredible it felt to just be with six girls. Real people who couldn't give two shits about who I was, who were fighting for their lives. It was one of the hardest things I've done, but it was the best thing I've done."

I have a lot to be thankful for this year.. My year has been the hardest yet most rewarding one yet. I've finally fought the fight of not 'being enough'. I have only wanted to reflect the love you guys have given me for years and show how important it is to take care of YOU. By grace through faith. Kindness always wins. I love you guys. God bless

On Feeling Guilty About Fame

"My mom gave up her whole life for me. Where we're from, you don't really leave. So when I started gaining all this success, there was a guilt that came with it. I thought, 'Do I deserve this?'"