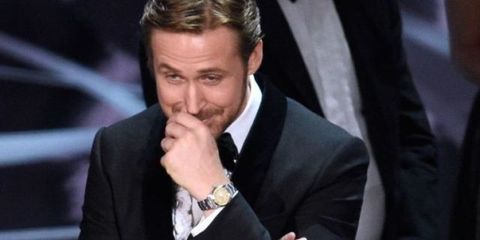 Remember when La La Land accidentally won best picture over Moonlight at the Oscars, and everyone spent a full minute on stage in panicked confusion making the IRL version of this face? 😱 . Well, everyone except Ryan Gosling, who was standing in a corner laughing to himself.

RYAN GOSLING IS LAUGHING AT THE FACT LA LA LAND ACTUALLY LOST BEST PICTURE THIS IS WHY I LOVE RYAN GOSLING pic.twitter.com/4c7m1IKilS

Gosling was the only person on stage who seemed genuinely amused instead of horrified, and he's finally explaining himself:

"What really was happening as I was watching, it was surreal anyway, I was watching people start to have this panicked reaction in the crowd and guys were coming on with headsets and I felt like someone had been hurt. I thought there was some kind of medical situation, and I had this worst case scenario playing out in my head."

"And then I just heard, 'Oh, Moonlight won,' and I was so relieved that I started laughing. But truthfully, I was also so thrilled that Moonlight won, I know the director…I've worked with them before. It's such a groundbreaking film, made for a million dollars, and incredible achievement and I'm so happy for them that they were being recognized."

Bless this angel of a man.