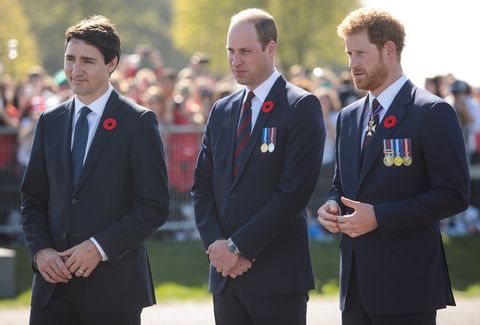 On Sunday, Prince William, Prince Harry, and Canadian Prime Minister Justin Trudeau appeared together, as part of a group of leaders paying tribute to a historic battle. The Telegraph reports that they appeared in northern France to commemorate the 100th anniversary of the Battle of Vimy Ridge, a World War I battle that became a key part of Canada's identity.

In that battle, Canadian soldiers, under British command, captured German positions across a four-mile ridge after British and French soldiers failed. According to the BBC, 3,598 Canadian soldiers died in the battle, and it was one of the first steps toward Canadian independence.

During a ceremony Sunday, Canadian and French young people placed a pair of boots on the field for every soldier who died, and volunteers read their names out loud. Prince Harry and Prince William placed the final pair of boots on a war memorial, and they all walked in the trenches the soldiers used during the war.

"This monument is also symbolic of Canada's birth and our enduring commitment to peace," Trudeau said. "It was through their sacrifice that Canada became an independent signatory of the Treaty of Versailles, and in that sense, in that way, Canada was born here."

But that wasn't the end for the three Internet obsessions. E! News reports that the three will attend a party Monday night to pay tribute to members of the military, including Canadians who competed in Prince Harry's Invictus Games. Can these three do any wrong?

This content is created and maintained by a third party, and imported onto this page to help users provide their email addresses. You may be able to find more information about this and similar content at piano.io
Advertisement - Continue Reading Below
More From Celebrity
Chloe From 'Too Hot to Handle' Is in 'The Circle'
Comparing the Two Biggest Royal Weddings
Advertisement - Continue Reading Below
Kate, George, and Charlotte Were Seen Shopping
J.Lo Shares First IG Photo Post A-Rod Split
Harry Has Experienced "Frostiness" from Royals
Billie Eilish Just Debuted a Bouncy Blonde Blowout
Gigi Shared an Adorable Spring Selfie With Khai
Katie Holmes Posted a 15th Bday Tribute to Suri
Chrissy Teigen Talked Stigma Around Infertility
Beyoncé Stuns in a Mesh Dress With Matching Gloves