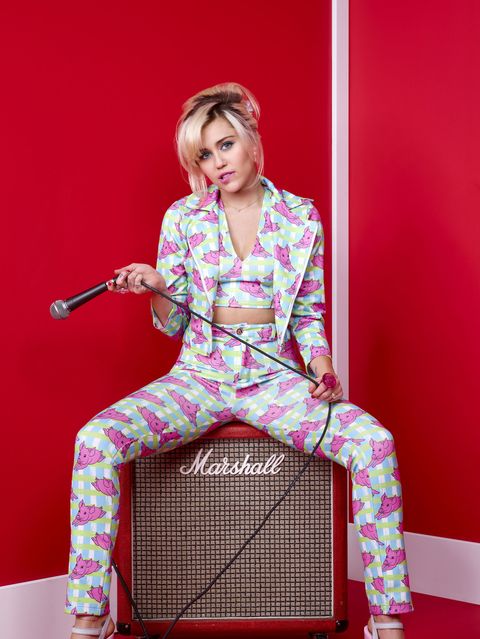 In many ways, Miley Cyrus is returning to her roots. She's famously re-engaged to Liam Hemsworth. She's exploring a country sound on her new album (she's a native of Tennessee, even though her music has always been more pop than country). She's also decided to clear her head in a big way by going "completely clean."

In a new interview with Billboard, Miley talks about her decision to give up marijuana and alcohol completely—at least for now.

"I haven't smoked weed in three weeks, which is the longest I've ever [gone without it]," she explains. "I'm not doing drugs, I'm not drinking, I'm completely clean right now! That was just something that I wanted to do."

Why the change of heart for the famous 420 lover?

"I like to surround myself with people that make me want to get better, more evolved, open," she says. "And I was noticing, it's not the people that are stoned. I want to be super clear and sharp, because I know exactly where I want to be."

Her new album will be largely political, but the first single, "Malibu," is a new love song about Liam that Billboard describes as sentimental. Miley explained her decision to open up about her relationship in such a raw way.

"They're going to talk about me if I come out of a restaurant with Liam," she says. "So why not put the power back in my relationship and say, 'This is how I feel'?"

And she clearly feels very strongly about Liam. The couple broke up in 2013 and got re-engaged last year. Miley explains why the breakup was good for them as a couple and how they fell in love again.

"Yeah, but also 'cause I needed to change so much," she says." And changing with someone else not changing like that is too hard. Suddenly you're like, 'I don't recognize you anymore.' We had to refall for each other."

If "Malibu" is half as sweet as that quote, we'll be listening to it for days.

Kayleigh Roberts Kayleigh Roberts is the weekend editor at Marie Claire, covering celebrity and entertainment news, from actual royals like Kate Middleton and Meghan Markle to Hollywood royalty, like Katie Holmes and Chrissy Teigen.
This content is created and maintained by a third party, and imported onto this page to help users provide their email addresses. You may be able to find more information about this and similar content at piano.io
Advertisement - Continue Reading Below
More From Celebrity
Charles Expertly Ignored Boris Johnson's Snafu
How Kitty Spencer's Wedding Dress Honored Diana
Advertisement - Continue Reading Below
Dolly Parton On the #FreeBritney Movement
Will & Kate Are Nervous About George's Future
George Won't Be Forced to Go to Boarding School
Diana Would Have Written a Memoir Too, Friend Says
A Slice of Diana's Actual Wedding Cake Is For Sale
Matt Damon Trolled Ben Affleck and Jennifer Lopez
This Old Video of the Queen Saying "Nah" Is LOL
Diana Had a Secret Message on Her Wedding Shoes