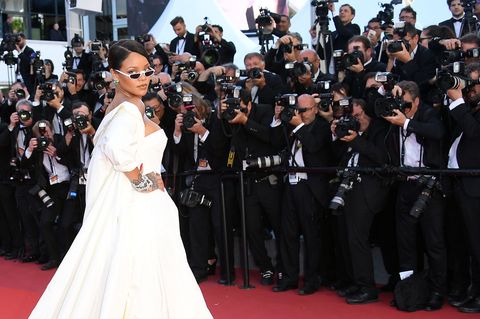 Look, I'm not here for your interpretations of Rihanna's body. I'm definitely not here for a certain publication saying her "fatness" is possibly starting a trend (what?). But perhaps the most infuriating thing about Rihanna being called fat is that, when the internet went justifiably crazy in her defense, everyone completely missed a crucial point: How we visualize, recognize, and talk about women's bodies is inherently cultural and racialized, and the faster we figure that out, the faster we'll realize the depth of the highly problematic and hypocritical ways in which we talk about women's bodies.

"How we visualize, recognize, and talk about women's bodies is inherently cultural and racialized."

In the inciting, um, article (if you can call it that), a blogger takes aim at Rihanna—conflating the terms "fat," "chubby," and "thicc" in one sad, sad piece. Do you even get what those mean, bro? Not only is it unacceptable to talk about RiRi's body as if it's fair game to be policed by anyone who's not her, but you can't even do *that* right. Thick and fat are two different things, especially to different communities.

In this BuzzFeed article, author Morgan Murrell highlights Twitter's praise for Rihanna's newfound "thickness." Thick: a word that has a deep history in black and Latino communities (what's up, mi gente), which have long praised thick women.

But while thick is a term meant to celebrate an alternative to a stick-thin body, it's still problematic, as nowadays the common usage of the term still excludes people—oftentimes the very people the term was meant for—and fetishizes parts of a woman; she's never really whole. We want someone with thick thighs, but god forbid she not have a flat stomach. We want our thick women to be thick in the "good" places, and thin in the "bad." We're still at a point where, in mainstream culture, only a certain thickness is praised, while another is shamed.

Communities of color laid claim to thick long ago—but now it's being "discovered," commercialized, and misappropriated.

Remember when Vogue declared this the Era of the Big Booty, and credited J.Lo and even Miley Cyrus for bringing the body type into exaltation, as if at no other time and on no other people were big butts seen as desirable? How do you Columbus an ass or the existence of another body type that isn't thin? Like this.

Which brings me back to my point about Rihanna. Yes, you can say the article was misogynistic (it was). Or that we're sick of women being fat-shamed (we are). But it's more than just that—what terms are being used to shame women for their size? To celebrate? To commodify? And who is using them? Who gets to deem what is "fat" versus what is "thick" and to whom do those terms apply? That is the true conversation we're skirting around. And a conversation worth having.

Samantha Leal Senior Web Editor I'm Sam, the senior editor at MarieClaire.com.
This content is created and maintained by a third party, and imported onto this page to help users provide their email addresses. You may be able to find more information about this and similar content at piano.io
Advertisement - Continue Reading Below
More From Celebrity
Royals Knew of Meghan's Miscarriage Before Op-Ed
Royals Feel "Great Sadness" for Meghan and Harry
Advertisement - Continue Reading Below
How Celebs Are Celebrating Thanksgiving This Year
Kristen Stewart Is "Protective" of Princess Diana
How Meghan & Harry Are Spending Thanksgiving 2020
Obama Ran for President Against Michelle's Wishes
Joe and Sophie Are Planning to Grow Their Family
Gigi Hadid Shared a Selfie With Her Daughter
Diana's Brother Wants 'The Crown' to Warn Viewers
Chrissy Said She's In a "Grief Depression Hole"