When you think about the characters in Shakespeare's Romeo and Juliet, you probably (and depressingly) think about a bunch of white people. It's because Hollywood, an industry populated by white men, has taught you to. You're not socialized to think of someone like me, a half-persian woman, as a natural fit for Juliet. And you're not socialized to think of Iranian-American actress Medalion Rahimi as a natural fit for Princess Isabella of Verona. But she's playing her in ABC's Still Star-Crossed, a glossy and gorgeous spin-off of Romeo and Juliet that comes from—where else? Shonda Rhimes.

Still Star-Crossed is notable for its diverse cast—a total departure from the routinely white-washed world Shakespeare productions typically occupy on screen. But the thing is, I wish it wasn't notable for this fact. I wish all shows were this diverse—that it was the rule, not the exception to it. We should be at the point where the casting of this show is moot, because Hollywood is an accurate mirror of the real world's diversity. "There's racist casting and there is normal casting," Rhimes tells MarieClaire.com. "Normal casting to me is a process that strives for representation and in many cases, strives to simply portray the world as it actually is instead of as falsely non-inclusive. And sadly, sometimes that involves removing the whitewash that exists on history."

Perhaps that's why Still Star-Crossed goes out of its way not to deal with racial acrimony. It exists in almost a pre-racism society, where the issues plaguing Romeo and Juliet, for example, have nothing to do with the fact that they're in an interracial relationship. It's the world we wished we lived in—just set in the fictional past. 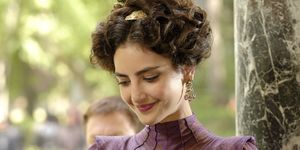 "The issues these people have are not race-dependent, they're bloodline and property-dependent," says executive producer Betsy Beers. As actress Lashana Lynch—who plays Rosaline— explains: "At the end of the day, it's all about the story. Once you get to episode three, there's no questioning the fact that Juliet is Rosaline's cousin—and that Rosaline's black and Juliet's white. When the next thing is cast that's just like this, we won't even question it."

Speaking of fact, here's the truth about historical accuracy: Mainstream history, for the most part, was written by old white men who only chronicled their points of view. So while conservative viewers (read: racists) might balk at a Persian princess and a black prince, guess what? Verona was a port town with plenty of diversity. Portraying everyone as white is inaccurate, not to mention irresponsible.

"Italy during Shakespeare's time had citizens of all cultures and colors. To pretend that it did not is ignorance. And I don't waste my time on ignorance."

"Italy during Shakespeare's time had citizens of all cultures and colors. To pretend that it did not is ignorance. And I don't waste my time on ignorance," Rhimes says. "The world was incredibly multicultural in the 15th and 16th century. It was a melting pot—especially cities near bodies of water," adds Beers. "People were coming and going, and there was a mix of races and ethnicities. What we do normally, which is say 'who's the best person for the part?' actually, historically, is correct. I like to think we are accurate and some other folks haven't been as accurate."

As a person of color, it's exciting to write about Shonda Rhimes once again breaking the mold with representation—but it's also disheartening because everyone else should have caught up with her years ago. But the fact is, Rhimes is doing something few others are: giving black, Middle Eastern, and Latina actors opportunities they can't find elsewhere. When will the rest of Hollywood follow suit? When—as Shonda asks—will "progressive casting" start being referred to as "normal casting?"

"It's never been something we 'consciously' try to do, and it's astonishing to me that so many years later, it's still a point of conversation," Beers says. "It's an unfortunate comment on how slowly things change. We got an award for diversity four years ago, maybe? We said the same thing: it's frustrating and it shouldn't be that way."

And all that aside, you know what? Still Star-Crossed is a really f*cking fun show with merits that transcend Shondaland's casting choices and sit firmly on the shoulders of stellar breakout performances like that of Lashana Lynch. Watch it. You won't regret it.

Mehera Bonner Contributor Mehera Bonner is a news writer who focuses on celebrities and royals—follow her on Instagram.
This content is created and maintained by a third party, and imported onto this page to help users provide their email addresses. You may be able to find more information about this and similar content at piano.io
Advertisement - Continue Reading Below
More From Celebrity
Serena Williams Signed a Major TV Deal With Amazon
Chrissy Wrote Luna the Sweetest Birthday Message
Advertisement - Continue Reading Below
Prince Harry Has Met Princess Eugenie's Son August
The Queen Returns to Work After Philip's Death
A Brief History Lesson on Brad and Jen
Rihanna and A$AP Were Spotted on a Date
Prince Harry Is "Really Missing" Meghan Markle
J.Lo and A-Rod Are "Completely Back On"
Chrissy Shared the Cutest Photo of Luna and Miles
Gaga Stuns in a Wedding Dress for 'House of Gucci'