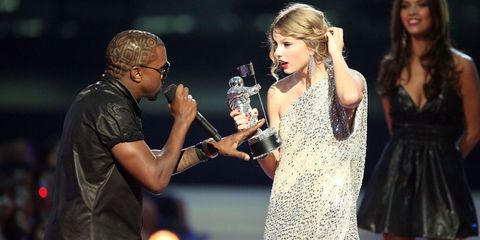 The 2009 VMAs will forever live on in pop culture infamy. You remember it: Taylor Swift won Best Female Video for her "You Belong With Me" vid. While she was accepting the award, Kanye West jumped on stage and interrupted her speech to proclaim that Beyoncé's "Single Ladies" video was one of the best of all time (MTV agreed, by the way, which is why Bey took home the coveted Video of the Year trophy later that night).

In case you need a refresher:

Taylor went on to write a song, "Innocent," about the experience. She and Kanye publicly made up, then later very publicly un-made up. The whole Swift/West drama saga can be traced back to this night in 2009.

In a new interview with The Hollywood Reporter, former MTV Chief Van Toffler revealed that Taylor wasn't the only one who got emotional that fateful night. She and Bey both cried backstage after Kanye's stunt, he says.

"When Kanye walked up onstage with Taylor [Swift] that year, it turned out that Taylor had to go onstage to do her song five minutes later. I ran out of the truck to see that everything was all right, and Taylor and her mom were crying hysterically," Toffler said. "I'm not always wonderful with emotions. I didn't know what to say. Then I went backstage, and Beyoncé was crying, too."

Belated hugs to everyone involved.