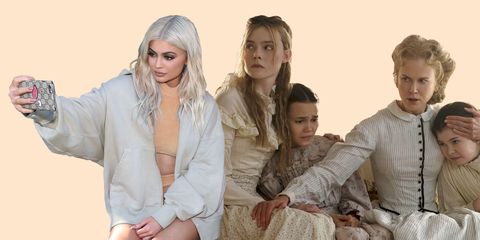 (Warning: Spoilers ahead! Don't say I didn't warn you.)

Sofia Coppola's The Beguiled is the perfect combination of Oscar bait and guilty pleasure, wrapped up in a very aesthetically pleasing bow—and if you haven't seen it yet (FYI, wide release is on Friday June 30) chances are you're suffering from FOMO. But the good news is that the Kardashians are here to get you caught up in a spoiler-filled breakdown—starring Kris Jenner as Nicole Kidman, Scott Disick as Colin Farrell, Kim Kardashian as Elle Fanning, and Kourtney Kardashian as Kirsten Dunst.

So basically, the movie starts with a fleet of beautiful women trapped at a boarding house during the Civil War:

Until one day, wounded Confederate soldier Colin Farrell shows up and is all "tend to my flesh wounds and let me plow your land." (Please feel free to interpret the phrase "plow your land" in more ways than one.)

Especially Nicole Kidman, who's overwhelmed with thirst because her age doesn't define her and she's still a woman with NEEDS:

But she's not half as thirsty as Kirsten Dunst, who ends up sharing a tender kiss with Colin Farrell after he declares his love for her:

But the thing is, Elle Fanning is being super flirty with Colin Farrell, and he seems here for it. Like, too here for it:

And in an alarming twist, Farrell heads over to Elle Fanning's room after dinner instead of Kirsten Dunst's:

But whoops, Kirsten Dunst catches them and shoves Colin Farrell down the stairs in a blind rage:

Colin Farrell breaks his leg, they casually amputate it, and upon waking up, he flies into an even blinder rage:

And Nicole Kidman is *not* here for it—especially after he threatens everyone with a gun:

So she poisons him with mushrooms and watches him die at the table like the stone cold momager that she is:

While Elle Fanning is all:

And then they stand there with his dead body just all: