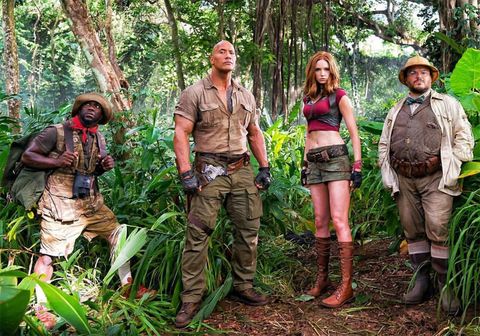 The first official trailer for the Jumanji reboot, Jumanji: Welcome to the Jungle, is here. If you were expecting a rehash of the 1995 Robin Williams' classic, though, you should probably sit down before you watch it.

Jumanji: Welcome to the Jungle takes the basic Jumanji concept (kids find a game that sucks them into a jungle adventure) and updates it for 2017 in a big way. In Welcome to the Jungle, the game isn't a board game, but an old school video game. Also, the jungle creatures don't come out into the real world—the teens playing the game get sucked into the video game world.

A game for those who seek to find, a way to leave their world behind. The new Jumanji: Welcome To The Jungle trailer lands tomorrow! #JumanjiMovie

Things start out very Breakfast Club-y. A group of four very different teens end up in detention together. As punishment, they're forced to clean out the school basement, where they find the magical game. They plug it in and choose their avatars (who are all very different from the teens in real life) and the next thing you know, they're in the game—as Dwayne Johnson, Jack Black, Kevin Hart, and Karen Gillan.

You don't just play Jumanji, Jumanji plays you. Find out how in the new #Jumanji: Welcome To The Jungle trailer by clicking the link in our bio!

Yes, it sounds weird and a little complicated, but that's only because it is. But then, it's a movie about an enchanted game that brings jungle adventures to life, so what can we really expect?

Watch the trailer below: