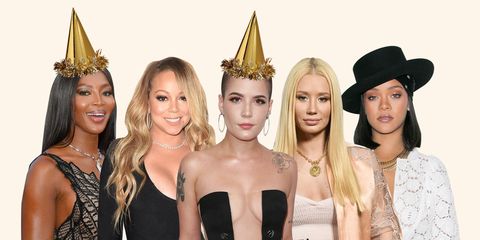 Expectation: to be the bigger person and turn the other cheek. Reality: being so here for all sorts of drama that it's a little bit sickening. (But don't stop!) Because it is probably human nature to enjoy the baser aspects of social interaction, here, for tickling your petty bone, a recap of the smaller-minded things that happened in Celebrityland this week.

Iggy Azalea shimmied back into the spotlight Tuesday when she responded to Halsey's outright insult—if you consider calling somebody a "f*cking moron" an outright insult, which I do—with the oldest diss in the book: "I don't know her." But in the context of the rest of her response, you can see what might be the inner turmoil of somebody who wants to get a shot in while struggling to hold herself back. See what we mean here.

Top quotes: "I was focusing on the food." And "I don't know where that motherf*cker is," in response to a question concerning ex-fiancé James Packer and some alleged illegal gift-giving. This implies that she is so done with him she cannot be bothered to give even a guess as to his geographic location. But not so done that she doesn't think of him as a motherf*cker. Delicious.

Two levels of petty, with the anonymous "insider" barging in like, "TWO WOMEN WHO WERE ONCE FRIENDLY AREN'T ANYMORE BECAUSE A MAN CHOSE ONE OF THEM OVER THE OTHER." But also petty of us to give attention to it. 😔 (But the quote about Rihanna's new love interest goes "They're both formidable women. No one knows exactly what went on between Naomi and Hassan but she certainly doesn't like being second best." UGH. I HATE MYSELF.)

When the President of the United States Took a Break from "Running the Country" to Tweet About Mika Brzezinski's Blood (Not Fun, but Is Petty)

And he ruined her vacation, which is one of the foulest things anybody could do. Bye forever!

Chelsea Peng I'm Chelsea Peng, the assistant editor at MarieClaire.com.
This content is created and maintained by a third party, and imported onto this page to help users provide their email addresses. You may be able to find more information about this and similar content at piano.io
Advertisement - Continue Reading Below
More From Celebrity
What Happens on Katie's Season?
Jennifer Lopez Wears Old Bracelet From Ben Affleck
Advertisement - Continue Reading Below
Simone Biles Cheers on MyKayla Skinner
See the Royals Socialize at a 1991 Cocktail Party
Eugenie Posts Pics from Harry & Meghan's Home
Queen Trolled Tourists Who Didn't Recognize Her
Blake and Ryan Recreated Their First Date on IG
Charles Expertly Ignored Boris Johnson's Snafu
How Kitty Spencer's Wedding Dress Honored Diana
Dolly Parton On the #FreeBritney Movement