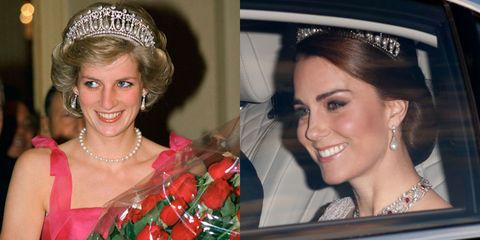 The Duchess of Cambridge stole the show tonight when she wore one of Princess Diana's favorite tiaras to the state banquet at Buckingham Palace in honor of King Felipe and Queen Letizia of Spain.

While we're also pretty obsessed with the dusty pink Marchesa dress she wore to the banquet (a version of it is on sale here), we can't take our eyes off of the tiara she picked out for the event.

The Cambridge Lover's Knot tiara was a favorite of the duchess's late mother-in-law, Princess Diana. Commissioned by Queen Mary around 1913 or 1914 from Garrand, a favorite jeweler of the royal family, it is one of the most famous tiaras in the British royal family's collection, according to People. Princess Diana received it as a wedding gift from Queen Elizabeth in 1981, The Telegraph reports.

This wasn't the first time the Duchess of Cambridge channeled her late mother-in-law, nor was it the first time she wore the famous diamond and pearl tiara. Kate wore it to the annual Diplomatic Reception at Buckingham Palace with a red Jenny Packham gown last December.

The first time she wore the famous tiara was at the same event in December 2015 with a white lace dress.

But the Cambridge Lover's Knot wasn't the only royal jewels Kate borrowed for the banquet. The diamond and ruby necklace she wore tonight is one that Queen Elizabeth has been photographed in many times over the years.

Lyndsey Matthews Freelance Writer Lyndsey Matthews is the Destination News Editor for AFAR; previously she was a Lifestyle Editor across all of Hearst Digital Media's brands, and a digital editor at Martha Stewart Weddings and Travel + Leisure.
This content is created and maintained by a third party, and imported onto this page to help users provide their email addresses. You may be able to find more information about this and similar content at piano.io
Advertisement - Continue Reading Below
More From Celebrity
Ariana Grande Got Married Over the Weekend
Ariana Grande Quietly Married Dalton Gomez
Advertisement - Continue Reading Below
Joie de Tracee
Jennifer Lopez and Ben Affleck: Everything We Know
Harry & Oprah's Mental Health Doc Has a Title
Serena Williams Might Miss the Tokyo Olympics
Jennifer and Ben Have "Unreal" Chemistry Together
The Sussexes Marked Archie's Bday in a Lovely Way
Queen's Cousin Accused of Selling Access to Putin
Meghan Wore a Meaningful Necklace for Vax Live