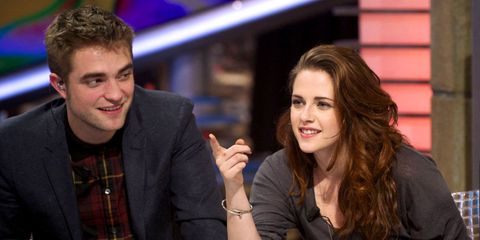 Donald Trump has a lot of feelings (don't even get him started on chocolate cake), and back in 2012 he directed said feelings at Robert Pattinson and Kristen Stewart, who were going through a very public breakup at the time. And, for reasons that no one fully understands, Trump decided he was Team Robert.

So how does it feel to have Trump weigh in on your breakup? Weird.

"I think there's so many different levels of it," Pattinson mused during a recent interview. "Your identity exists on many different planes at the same time and they all can be quite different from each other. When he said that, it didn't really mean anything. But I guess now I'm sort of thinking, like, 'Well, I guess that is related to me.' But how does that fit in with all the other things going on in my life? And sometimes you think, 'Can I use this in my acting? Or should I be putting it away.' It's kind of interesting, I guess. I don't know—this could be why people get annoyed with me."

Vaguely confused about what all ^^ means, but sounds like Pattinson is unbothered by Trump's tweets. Meanwhile, Stewart addressed them during an appearance on SNL, and also told Stephen Colbert "I tried to [talk to him about it]. He didn't respond. I did it publicly and he didn't publicly respond. I was kinda disappointed. I don't know, man. We're all different, that's okay. Celebrate the differences, you know, whatever."

Mehera Bonner Contributor Mehera Bonner is a news writer who focuses on celebrities and royals—follow her on Instagram.
This content is created and maintained by a third party, and imported onto this page to help users provide their email addresses. You may be able to find more information about this and similar content at piano.io
Advertisement - Continue Reading Below
More From Celebrity
Meghan Markle Talks the "Basic Right to Privacy"
Meghan Said Her Father Lied About Paparazzi Photos
Advertisement - Continue Reading Below
Why Isn't Archie Mountbatten-Windsor a Prince?
A Body Language Expert on the Oprah Interview
See an Adorable New Sussex Maternity Shoot Photo
Why Is the Royal Family Called "The Firm?"
Read Serena Williams' Statement on Oprah Interview
The Internet Reacts to Meghan and Harry Interview
Prince Harry: The Queen Was Advised Not to See Me
The Palace Had Concerns About Archie's Skin