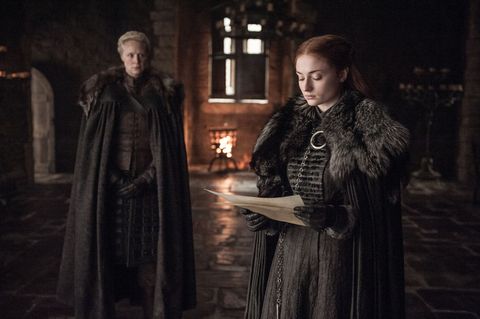 There have been a lot of theories this season involving Arya, Sansa, Littlefinger, and death. Will Arya kill Littlefinger? Will Sansa get wise to his manipulations and do it herself? Will Littlefinger succeed in turning the sisters against each other?

This week, a few key moments hinted that the latter might turn out to be true. First, Sansa has a knowing conversation with Littlefinger about Brienne of Tarth, aka the Stark girls' personal bodyguard. In true Littlefinger form, he poses the question as if it's about Sansa's safety—wouldn't Brienne of Tarth have to protect either of the Stark girls, even against each other?

You might think this would inspire Sansa to keep Brienne close, but it does the opposite. Later in the episode, Sansa sends Brienne to King's Landing to represent her in a meeting, against Brienne's advice. Why do that? So that Brienne, who is sworn to protect both Stark girls, won't be around if Sansa feels like she needs to eliminate her long lost sister.

Will Sansa go through with it? Would she be able to if she wanted to? Arya catches Sansa going through her things, including her creepy collection of faces. Arya delivers a very loosely-veiled threat to kill Sansa, steal her face, and take her place ruling the North.

Hopefully the Stark girls will realize what's going on and join forces against Littlefinger, but if Arya kills Sansa, at least Sophie Turner can still appear on the show?