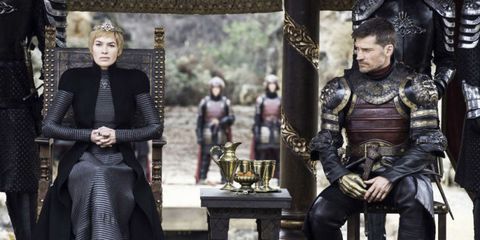 The Game of Thrones finale is upon us, so, for those of us who have avoided the leaks and the spoilers, let's talk about fan theories for this weekend's big episode. Here are this week's theories, ranked from least to most likely to come true.

Tyrion is about to get punished for losing a dragon.

Yes, the terrible non-plan of last week's episode, "Beyond the Wall," was technically Tyrion's idea. But as dumb as "capture a zombie!" is as a suggestion, attempting to do that without anything resembling a real plan? That's just beyond idiotic.

The camp that is eagerly awaiting an opportunity for Dany to attempt to put Tyrion to death with dragon fire, only to learn that he doesn't burn and has secretly been a Targaryen this whole time, are rooting for this to be the moment that makes Daenerys turn on her Hand. Unlikely though. She wasn't nearly as upset about losing a dragon as expected and Jon is there to comfort her with his broody, beautiful eyes.

Last week's disastrous mission was a trap orchestrated by the Night King to catch a dragon.

The mission Jon and his group of zombie hunter's attempted to pull off last week made no sense. There are some who believe that's because the Night King was pulling the strings like a maniacal puppet master behind the scenes.

Honestly, I'd love to be true, because then at least I could muster respect for something about the whole situation, but how would he have manipulated Tyrion into making a terrible suggestion, Jon into jumping on board, Daenerys into going along with it, and everyone else who knows them from not speaking up? If he were that powerful, it seems like he could just magically force Dany to fly a dragon to the North and leave it there for him. For some reason, it would seem, our heroes actually thought this plan was a good idea all on their own.

Littlefinger is going to die.

While Jon and Daenerys are busy lusting over each other inappropriately and making horrible decisions, Sansa and Arya have been at the heart of a much quieter drama brewing in the North. Littlefinger has been (successfully) manipulating the sisters, turning them against one another.

Some fans are clinging to a hope that Sansa and Arya aren't actually turning against one another—they're just faking it, you know, to trick Littlefinger. This theory doesn't work, mostly because of last week's disturbing scene of the sisters bickering and issuing barely-veiled threats while alone in Arya's room. Unless they were rehearsing a tense argument they planned to have in front of Littlefinger later, there's no way this fits with that theory.

Still, fans are hopeful that Arya and/or Sansa will wise up to Littlefinger's machinations and turn on him. I definitely think Littlefinger will die and at the hands of a Stark sister (or Brienne, but probably a Stark sister), but I'm not sure we're there yet. Possible, but not assured.

The CLEGANEBOWL IS COMING.

GOT fans have been thirsting for the Cleganebowl—a showdown between the Clegane brothers, who you know best as "The Mountain" and "The Hound." The Hound's quasi-resurrection (okay, so he never died onscreen, but the implication was that he was no longer with us) points to this showdown coming, as does this moment from the season's trailer, which shows the Hound somewhere south and gearing up for a fight.

Cersei will become not pregnant somehow.

But, in Season 5, we saw a young Cersei go to a witch for a prophecy about her future. The witch, known as Maggy the Frog in the books, tells Cersei that she will have three children. Cersei has already had three children—Joffrey, Myrcella, and Tommen—and outlived them all, also in accordance with the prophecy.

Unless Thrones plans to deviate in a big way from that prophecy (which the show could have easily omitted), all signs point to Cersei not having a baby. She might miscarry, or it's also possible that the pregnancy is a lie, meant to keep Jaime close (something I wouldn't put by Cersei).

Jon and Dany will finally figure out they're related.