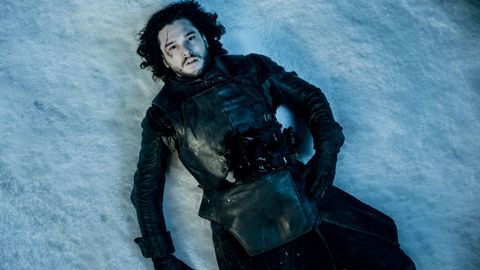 The most recent episode of Game of Thrones was rage-inducingly nonsensical, and I blame Jon Snow. I could blame the ravens, and the dragons, and the ice zombies, and George R.R. Martin for not writing faster—but I place most of the blame on Jon Snow.

I honestly don't get his appeal. Sure, he's very pretty, and his hair is curly, and his eyes are big and sad, and I can see where all of those things combined might make you want to give him a big hug—but he's so lame. I feel like the reasons are obvious, but in case you're not convinced, here's why:

Jon is boring, and his arc is boring. Upon meeting him in the pilot, I was like, "Ooh, the very skilled and handsome bastard son of an honorable lord. He seems like he has something to prove—intriguing."

And then what does Jon do? He goes and hangs out on a blizzard mountain for the next six years. Sometimes he leaves the blizzard mountain to go to blizzard plains, or blizzard forests, or blizzard abandoned towers. It's not that Jon doesn't get to do cool things (he fights zombies, which is at worst mildly interesting), it's that his story doesn't go anywhere.

Jon's sworn to the Night's Watch. He's committed to honoring that oath. And that's both incredibly admirable and incredibly dull. I've never been like, "WOW, I wonder what Jon will do this scene/episode/season," because it was always some combination of brood, shiver, and fight a zombie.

2. He's objectively bad at the things we're supposed to think he's good at.

Maybe I could forgive Jon's boring storyline if I didn't feel constantly lied to about his abilities. But it's gotten to the point where Game of Thrones is straight-up faking his competence and charisma.

Game of Thrones: Jon Snow is a man of unwavering honor and resolve, like his dad Ned Stark!

Reality: Jon Snow breaks his vow of chastity to sleep with Ygritte. Moreover, they're in a hot spring in the middle of an icy wasteland, which he hoards for sexing purposes instead of immediately telling everyone that there's a wonderful place very close by to get warm.

Game of Thrones: Jon Snow is an excellent leader.

Reality: Jon Snow abandons a plan that was well thought-out by his advisors to charge right into Ramsay Bolton's obvious trap at the Battle of the Bastards, a decision that would have most certainly lost the battle and the lives of everyone fighting for Jon if Sansa hadn't gone behind his back and enlisted the knights of the Vale to help.

Game of Thrones: Jon Snow is a fantastic tactician.

Reality: "Beyond the Wall."

Reality: Watching their romance is like watching a middle schooler try to convince everyone that his cousin is his date at a dance. And that's not even an incest joke, it's an overwhelming awkwardness joke—but it works on both levels, which is also hard to stomach.

3. He serves exactly one function on the show.

Jon Snow is nothing more than a White Walker Paul Revere. His primary function in the story, so far, has been to let other people know that the Army of the Dead is coming, which is not a thing that only he can do. Eventually, he'll probably ride a dragon and/or impregnate Dany, but those are also not things I want to see such a disappointing character do. In a vivid, multidimensional world full of vivid, multidimensional characters, Jon Snow is a paper doll with a man bun.

4. He's done more bad than good since he was resurrected.

When Jon died at the end of Season 5, I was shocked, but not sad. I hoped it was real—that the show had been brave enough to kill off a character who didn't pull his weight in an otherwise rich ensemble. Of course, I didn't truly believe that the Thrones creators actually were that brave, and neither did you, and we were right.

Let's review Jon's track record since he came back from the dead, using the same very scientific method Hogwarts uses to choose who wins House Cup:

Daenerys Has Been Styling Her Hair Like Khal Drogo 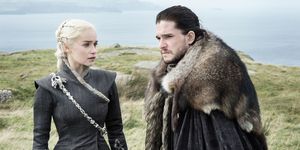 Here\'s How Much The \'Game of Thrones\' Cast Make

Kayleigh Roberts Kayleigh Roberts is the weekend editor at Marie Claire, covering celebrity and entertainment news, from actual royals like Kate Middleton and Meghan Markle to Hollywood royalty, like Katie Holmes and Chrissy Teigen.
This content is created and maintained by a third party, and imported onto this page to help users provide their email addresses. You may be able to find more information about this and similar content at piano.io
Advertisement - Continue Reading Below
More From Celebrity
People Are Devastated by Britney's Revelations
Britney Spears on "Abusive" Conservatorship
Advertisement - Continue Reading Below
'Too Hot to Handle' S2 Was Filmed In Paradise
About That "Sexy Nerd" From 'Too Hot to Handle'
Prince Charles Is Leaving London When Harry Visits
What Happens on Katie's Season?
Meghan Wrote a Book When She was in Eighth Grade
Irina Pairs Her LBD With a White Shirt and Sandals
A-Rod Explained Why He Was Spotted With Ben's Ex
Selena Felt "So Less Than" in Past Relationships