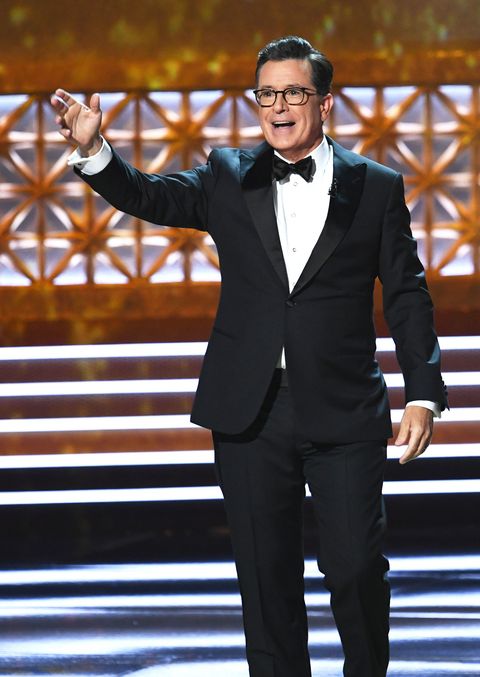 Stephen Colbert has trafficked in Donald Trump jokes this year to the tune of 3.195 million viewers per episode, on average, for The Late Show with Stephen Colbert. So pretty much no one thought he wouldn't take a few jabs at POTUS during his opening monologue at this year's Emmy Awards. And the crafter of the c*ck holster joke did not hold back. Here, some of the funniest/harshest jokes directed at DJT from Colbert and some of TV's biggest stars:

"Imagine if your president wasn't beloved by Nazis."

Colbert's pre-recorded opening number included the host popping in and out of the year's biggest shows, natch, and when he dropped by Veep, Julia Louis-Dreyfus as fake former-president Selina Meyer sang a bar referencing the Charlottesville crisis.

"Even treason's better on TV."

Colbert then popped by The Americans where he threw some shade about the current investigation regarding the Trump administration's role in the Russian interference in the 2016 election.

"There's no way that anyone could possibly watch that much TV...other than the president."

That was referring to the fact that 450 original shows that appeared on TV this season—and the president's viewing habits. Colbert went on: "Hello, sir, thank you for joining us. Looking forward to the tweets."

"The biggest star of the last year is Donald Trump..."

"...and Alec Baldwin obviously," Colbert continued. But then came the kicker: "You guys are neck and neck—and Alec you're up against a lot of neck."

Colbert went on for a while about Trump's unrequited love for the Emmys. The president was nominated multiple times for Celebrity Apprentice...but never won. "Why didn't you give him an Emmy?" Colbert asked. "If he had an Emmy I bet he wouldn't have run for president. So, in a way, this is all your fault."

Continuing on the same why-didn't-Trump-win thread, Colbert went on to joke: "You like Walter White. He's just Walter Much Whiter."

One of the jokes that got the most laughs came from the president himself. Driving home the point that Trump is real bitter he never took home a golden statue (gold is his fave color), Colbert pulled up actual footage from the presidential debates. When Hillary Clinton mentioned Trump's Emmy noms, the then-Republican nominee interrupted her with, "shoulda gotten it."

"Because unlike the presidency, Emmys go to the winner of the popular vote."

In one final dig at the president's Susan Lucci situation, Colbert explains that the reason Trump always came out an Emmy loser is "because unlike the presidency, Emmys go to the winner of the popular vote."

"Every day since November 8th."

Later in a skit spoofing Westworld, Colbert was recalibrated by Bernard Lowe AKA Jeffrey Wright. Wright asks Colbert if he's "ever questioned the nature of [his] reality?" Colbert responds: "Every day since November 8th."

"At long last, Mr. President, here is your Emmy."

Alec Baldwin won the Emmy for Outstanding Supporting Actor in a Comedy Series for his portrayal of the president on Saturday Night Live. He kicked off his acceptance speech with the above.

Presenter Lea Michele was describing this year's nominees for Outstanding Reality-Competition Program, when fellow presenter Kumail Nanjiani added that the shows, "also celebrate people who frantically race across international borders and people who can scale walls really, really quickly. In other words, the president's worst nightmare."

When Donald Glover took the stage to accept his second Emmy (this time for Outstanding Lead Actor in a Comedy Series), he thanked "Trump for making black people number one on the Most Oppressed List." Adding that, "he's the reason I'm probably up here."

"We had a whole storyline about impeachment..."

Julia Louis-Dreyfus won an Emmy for Outstanding Lead Actress in a Comedy Series for her role as Selina Meyer on Veep (again). During her speech she teased at what's to come in their next (and final) season. "We had a whole storyline about impeachment—but we abandoned that because we were worried somebody else might get to it first," she quipped.

As presenter Jeffrey Dean Morgan was describing the roles of the women nominated for Outstanding Lead Actress in a Drama Series, he wrapped with: "And, spoiler alert: The 47th President of the United States." To which fellow presenter Tatiana Maslany dead-panned: "She'd be great. She doesn't tweet." Then elbowed Morgan in the ribs—"get it? Get it?"

Danielle McNally Danielle McNally is the Deputy Editor of Marie Claire, overseeing features across every topic important to the MC reader: beauty, fashion, politics, culture, career, and women's health.
This content is created and maintained by a third party, and imported onto this page to help users provide their email addresses. You may be able to find more information about this and similar content at piano.io
Advertisement - Continue Reading Below
More From The Emmys 2021
The Best Reactions to Zendaya's Emmy Win
Zendaya Wore Two Stunning Outfits for Emmys Night
Advertisement - Continue Reading Below
The 2020 Emmys Had a Confusing Vibe
Tracee Ellis Ross Is a Queen in This Gold Dress
'Schitt's Creek' Swept the 2020 Emmys
Regina King Wore a Breonna Taylor Shirt to Emmys
The Best Celebrity Instagrams From The 2020 Emmys
What Celebs Are Wearing to the Emmys...From Home
The Emmys Will Have a Red Carpet This Year
What Everyone Wore to the Emmys After-Parties