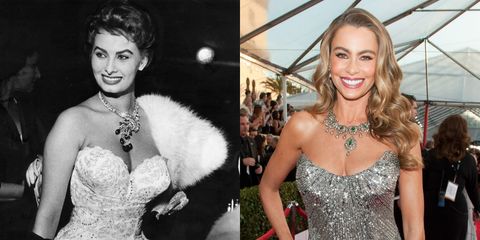 We love playing the twin game with lookalike stars who dominate today, but what about the modern A-listers who look exactly like icons from yesteryear? From old Hollywood glamazons to current "It" girls, here are the mind-blowing side-by-sides of some of our favorite celebs and their counterparts from another era.

For more stories like this, including celebrity news, beauty and fashion advice, savvy political commentary, and fascinating features, sign up for the Marie Claire newsletter (subscribe here).

From the big eyes to full cheeks, it's hard to tell the difference between a young Helen Mirren and Jennifer Lawrence.

Both in looks and personas, Sofia Vergara is Sophia Loren's modern-day counterpart. Given their sultry looks, it's no surprise the two women became sexy screen sirens.

If they weren't decades apart in age, we'd be pretty sure that Lauren Bacall and Karlie Kloss, with their heart-shaped face and deep set eyes, were long-lost twins.

Liv Tyler possesses the same delicately fair skin, dark hair, and green eyes that made Ava Gardner one of the biggest film stars in the '40s and '50s.

If you told us model Jourdan Dunn was the '80s singer Sade's clone, we'd believe you. Their almond-shaped eyes are almost identical.

People have often compared model Kendall Jenner to the '70s actress Ali MacGraw, and it's clear why. It's not just their long dark hair though—they give the same look to the camera, too.

We think it's their oval faces and slender jawlines that make Brandy the spitting image of '60s actress Olga James.

A pre-mustache Tom Selleck reminds us a lot of The Vampire Diaries star Ian Somerhalder. Maybe Ian should give a 'stache a go?

Both Audrey Hepburn and Lily Collins have the acting chops to back up their beauty. The two actresses also share many of the same petite facial features.

No, you're not seeing double. Orange is the New Black star Uzo Aduba has the same million-watt smile that Gladys Knight was known for.

She may have played Marilyn Monroe in My Week With Marilyn, but Michelle Williams more closely resembles French film star Brigitte Bardot, if you ask us.

It's his soft eyes that make the devilishly handsome George Clooney a dead ringer for legendary actor Clark Gable.

Shalom Harlow and Olivia Wilde share the same square-shaped face, high cheekbones, and almond eyes. And lucky for both of them, this combo seems to be the key to being photogenic.

Not only are they both chart-topping singers, but Harry Styles takes after the legendary Rolling Stones singer in the looks department, too, sharing a similar nose and eyes.

A few years his junior, Joseph Gordon-Levitt is very reminiscent of the late Heath Ledger with their thin smiles and dark, deep eyes.

The resemblance between Helen Hunt and Leelee Sobieski is remarkable. We think it's their oval face shape and serious stare.

We're not sure if French actor Vincent Cassel has the dance moves of Fred Astaire, but between their strong chin and slight grin, we'd say he's a chip off the ol' block.

The Queen of Pop and up-and-coming artist Sky Ferreira owe it to their short, sleek jawline for looking so similar. They have pretty similar brows, too.

From their steely stares to their chiseled jawlines, James Franco looks eerily similar to the late actor Jame Dean.

It isn't just her success on the catwalk that has the fashion world buzzing that Bella Hadid is the next Carla Bruni—her high cheekbones make her a dead ringer for Bruni back in the '90s, too.

In every other way, Queen Latifah is truly unique, but when it comes to her looks, the singer and actress has a striking resemblance to novelist and folklorist Zora Neale Hurston.

Even though Cate Blanchett is slated to play Lucille Ball in the Amazon biopic about the late actress, we're still holding out hope that Debra Messing will get to play her one day. It's not just their fiery red hair—their personalities seem similar, too.

Christina Aguilera and '40s icon Ginger Rogers share more similarities than just being blonde bombshells. They also both made it in Hollywood as singers.

Sure, Mark Ruffalo and Burt Reynolds are both immensely talented and famously laid-back actors, but they also share the same jawline.

We know Gwen Stefani will be elated by this matchup. After all, the singer first started dying her hair platinum blonde to emulate the screen star. Their famous red pouts are just the cherry on top.