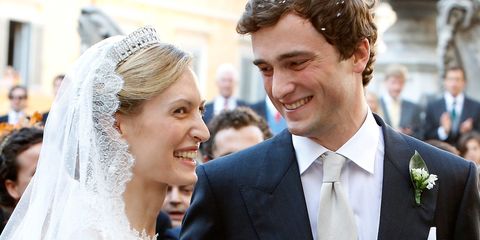 Well, newsflash: We've actually had our fair share of aristocratic action on this side of the pond. In fact, lots of royal families have made their homes here in the States.

Not too shabby in the neighbor department, huh?

Lord Frederick, AKA Freddie Windsor, is the first cousin once removed form the Queen–making him 42nd in line for the throne. He was once a music critic for Tatler magazine, but now works as a financial analyst and lives in Los Angeles with his wife, actress Sophie Winkleman.

After a longtime relationship and engagement ended, the Swedish princess headed to New York City for a fresh start, where she worked for the World Childhood Foundation, an organization co-founded by her mother. There, she met British-born, American-living financier Christopher O'Neill. They married in 2013 and now have two children (one born in New York, one in Stockholm). They lived in NYC until early 2015, when they moved to Sweden.

The prince and his wife, Elisabetta Maria Rosboch von Wolkenstein (she goes by Lili, because she gets it), make their home in New York City. Cuteness alert: The prince gave up his right to the throne (he was sixth in line) in order to marry her. According to The Times, "palace sources claim that the prince chose to deliberately give up his right to the throne so that he could live an independent life with wife Lili, free of any official role."

The Thai princess is the eldest child of King Bhumibol Adulyadej and Queen Sirikit. She gave up her royal title and made a home in the U.S. with her husband, Peter Ladd Jensen, but after her divorce in 1998, she came back to Thailand where she began a film career.

The prince was born to Prince Alexander of Yugoslavia, and his parents escaped the socialist revolution in 1942, making their home near Paris, where he inherited a love of precious jewels. He later moved to New York City, where he worked for 18 years in the auction jewelry business at Sotheby's before creating his own jewelry firm, Prince Dimitri Company.

The young princess moved to New York in 2013 to work for the online auction firm Paddle8 as a benefit auctions manager.

Princess Eugenie's sister, Princess Beatrice, followed in her sister's footsteps earlier this year, when she decided to take some finance courses in the U.S.