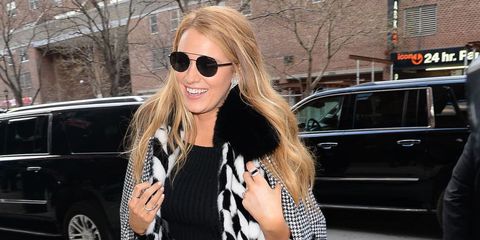 Whether she's channeling a Disney princess on the Cannes red carpet or looking glamorous for a night out at the White House (totally casual, we know), Blake Lively never disappoints in the style department. Herewith, some of her best looks of all time.

In a monochromatic pattern mix out in New York City.

In Emanuel Ungaro dress and Christian Louboutin heels for The Tonight Show.

In Vivienne Westwood Couture during the premiere of Slack Bay.

In Chanel at a Vanity Fair dinner during the Cannes Film Festival.

In a Salvatore Ferragamo dress coat during the Cannes opening night dinner.

In Atelier Versace at the opening night premiere of Café Society during Cannes Film Festival.

In Juan Carlos Obando at the photo call for Café Society during Cannes Film Festival.

Getting ready to go out during the Cannes Film Festival in an Esmeralda-inspired outfit.

In a feathered skirt and SemSem varsity jacket at a luncheon in New York.

In a Lindsey Thornburg cloak and Augden sweater while out in Brooklyn.

In J. Brand jeans, a Deby Debo coat, and Chanel shoes and bag out in New York City.

Leaving her hotel in New York City in a Peuterey fur jacket.

In J. Brand jeans and a Lindsey Thornburg cloak while out filming Woody Allen's new movie in New York.

At a screening of A Path Appears in Greenwich, Connecticut.

Taking a phone call while filming All I See Is You in Barcelona.

Wearing a little black dress alongside some mimes.

In Laurence Xu Couture at a press conference for the movie 'Log Out' in Beijing.

Out in New York City in Sarah Flint shoes.

Leaving Sam Brocato Salon after getting her hair done in New York City.

At her Allure magazine cover party in Ralph &Russo Couture.

Next
All the Celebrities (and Their Outfits) at NYFW 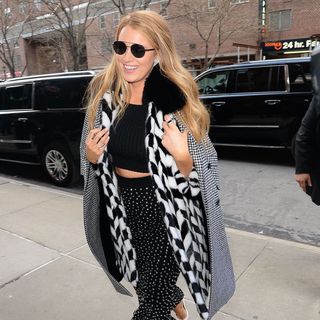 This content is created and maintained by a third party, and imported onto this page to help users provide their email addresses. You may be able to find more information about this and similar content at piano.io
More From Celebrity
William Reveals Which of His Kids Is the Cheekiest
Serena Williams's Daughter Is Taking After Mom
Advertisement - Continue Reading Below
EmRata Opts for Faux Fur and Yeezy Boots
Rob Lowe: Prince Harry Is Rocking a Ponytail Now
Rihanna Stuns in $2 Million of Diamonds and Rubies
Fans Think Zayn Just Hinted at Proposing to Gigi
Ben Affleck Said J.Lo Faced "Sexist, Racist" Media
Kate & William Might Get Vaccinated on Camera
40 Rare Photos of Grace Kelly Through the Years
The Best TV and Movie Wedding Dresses of All Time