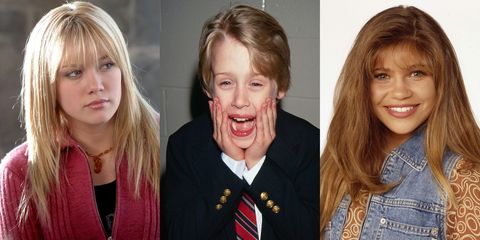 Remember these familiar faces? We bet you do.

From 1957 to 1963, Jerry Mathers charmed Leave It To Beaver's audiences each week as the Cleaver family's adorable little rascal, Theodore "Beaver" Cleaver.

After Leave It To Beaver, Jerry joined the United States Air Force Reserve, eventually rising to the rank of Sergeant. He's done a few acting parts here and there, and is now the national spokesman for the Pharmaceutical Research and Manufacturers of America organization.

Another Happy Days alum, Ron Howard first got his start as adorable redhead Opie Taylor on The Andy Griffith Show before moving onto his role as Richie Cunningham.

Ron has made a name for himself as a director and producer, winning over critics and audiences alike with award-winning projects including A Beautiful Mind and Arrested Development.

5 of 78
THEN: Maureen McCormick

Though she appeared in shows like Bewitched and I Dream of Jeannie, Maureen's most famous role was on The Brady Bunch as the family's beautiful eldest daughter, Marcia Brady.

In 2008, Maureen published her controversial (and widely-read) autobiography, Here's the Story: Surviving Marcia Brady and Finding My True Voice, detailing her difficult experiences portraying one the of most famous characters of the 1970s.

Danica wooed the hearts of many teenage boys while playing Winnie Cooper on The Wonder Years.

In 2014, Danica wowed audiences on Dancing With The Stars' 18th season, coming in sixth place with her partner Valentin Chmerkovskiy.

Candace followed in the footsteps of her older brother Kirk, a.k.a. Mike Seaver of Growing Pains. In 1987, she was cast as D.J. Tanner in Full House, starting her career as one of most famous preteens of the late '80s and early '90s.

During her appearance in Dancing With The Stars in 2014, she was a fan favorite. The married mom-of-three has also written two books: Reshaping It All: Motivation for Physical and Spiritual Fitness, a New York Times best seller, and Balancing It All: My Story of Juggling Priorities and Purpose.

As a teenager, Corey starred in hits including Friday the 13th: The Final Chapter, Gremlins, and Stand By Me, making him a favorite '80s heartthrob.

Between 2007 and 2008, he appeared with fellow '80s star Corey Haim in the short-lived reality series The Two Coreys. He's also a big animal rights activist, appearing in a PETA ad with his now ex-wife Susie Feldman.

Who could forget this adorable little guy? With iconic roles in Home Alone, My Girl, and Richie Rich, Macaulay became one of the most famous child actors of all time.

He's since appeared in films like Saved! and Party Monster, but Macaulay has mostly stayed out of the spotlight — though his comedic band The Pizza Underground briefly gained notoriety when a video of the actor eating pizza went viral in 2013.

From 1994 to 1999, these identical twins charmed audiences while starring on Sister, Sister.

Anybody who grew up watching Boy Meets World in the '90s couldn't help but love the wise-beyond-her-years Topanga — and envy her thick, wavy blonde hair.

Can you believe that Steve Urkel was originally only supposed to appear once on Family Matters? Fortunately, Jaleel's hilarious portrayal made Urkel an instant favorite, earning him a permanent spot on the show.

In 2012, Jaleel appeared on Dancing With The Stars, impressing judges with his partner Kym Johnson.

Tatyana started her acting career at the age of six on Sesame Street, then honed her comedic chops on the series that made Will Smith famous: The Fresh Prince of Bel-Air.

After her Fresh Prince days, this brilliant lady went on to get her bachelor's degree in African-American Studies at Harvard University. She's also made television appearances on shows including Second Generation Wayans, The Eric Andre Show, and Love That Girl!.

While she's no longer sporting her '90s scrunchie and glitter eyeshadow, Melissa is still looking great. She now has three children with husband Mark Wilkerson and resides in Westport, Connecticut.

Though she eventually had a show of her own (That's So Raven), Raven-Symoné got her start at the age of three on The Cosby Show.

After guest hosting the show multiple times, Raven-Symoné now has a permanent spot on The View — along with seriously cool gray hair.

Twins Mary-Kate and Ashley Olsen dominated the child star game in the late '80s and early to mid-'90s, first both appearing as baby Michelle Tanner on Full House before moving on to more starring roles in their own films, including Passport to Paris and When in Rome.

While the Olsen twins have taken a step out of the TV and film spotlight, they are now two of the most successful designers in the fashion industry. Their couture label The Row and contemporary collection Elizabeth & James have gained huge followings amongst fashion's elite, as well as everyday women.

During the 2000s, Dakota appeared in huge blockbusters like Uptown Girls and War of the Worlds. And at the age of seven, she had already earned a Screen Actors Guild award nomination for her role in I Am Sam.

Can you believe she's already 21? The actress is also a bonafide fashionista, appearing on the covers of magazines including Elle, Cosmopolitan, and Vanity Fair. 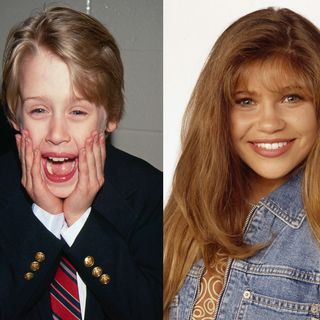