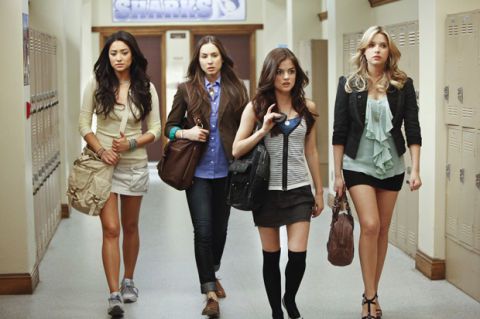 While we're huge Pretty Little Liars fans, we can't help but notice that Hollywood tends to glamorize relationships that are a little disturbing, and even at times illegal. There's nothing romantic about older men taking advantage of younger women, and while we tolerate it in the fictional Rosewood bubble — you know, the place where no one has to go to school, report crimes, or tell their parents what they're up to — we'd rather see age-appropriate relationships heat up and these types fade away.

This fan-favorite student and teacher affair kicked off PLL's ongoing theme: high school girls dating older men and no one thinking it's weird.

In Alison's words, "He's your sister's boyfriend. And he's like, old."

Ironically, Allison had her own thing going on with Ian. Never trust a guy in the N.A.T. club.

We began sensing a pattern when Spencer had a fling with the older doctor who's also her sister's fiancé.

Wren can't get enough of the younger women.

He thought she was 21, but she was still in high school. Classic Ezra.

A man of the law knows better than that. Or does he?

Aria's mom's new fiancé: "Always had a thing for the bad girls..." Unfortunately it's a common trend in Rosewood.

The fact that she's the same age as his missing little sister isn't going to stop Jason.

The 7 Most Iconic Red Lips On TV

Advertisement - Continue Reading Below
More From Culture
'Too Hot to Handle' Is Your Next Netflix Binge
12 of Netflix's Most Dramatic Movies Ever
Advertisement - Continue Reading Below
A New Ep of 'Tiger King' Will Drop This Weekend
Clare Crawley's 'Bachelorette' Cast Is Out
Will Clare's 'Bachelorette' Season Be Canceled?
The Best Korean Dramas to Get You Hooked
87 Movies Everybody Should Watch At Least Once
The Best Documentaries on Amazon Prime Right Now
Heart-Pumping Action Movies Coming Out This Year
The Best TV Shows on Hulu Right Now