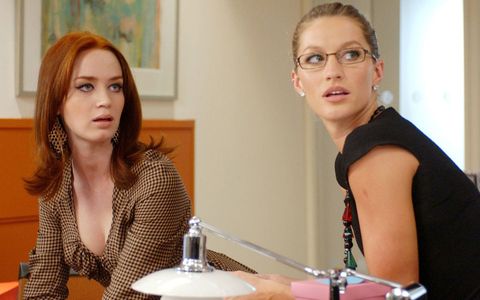 It's been a long eight years since The Devil Wears Prada first graced movie screens, and ever since then we've been clamoring for more Miranda Priestly and the gang. A sequel to the book, Revenge Wears Prada: The Devil Returns, was published last year, but it's just not the same.

And if it were up to star Emily Blunt, we'd get even more movies about the crazy world of Runway magazine. "I would do it, but only if everyone did it," Blunt told E! News. "I don't know why it hasn't been done, but everyone's got to do it."

She's not the only one who's game, either. Anne Hathaway said she'd be thrilled. "Wouldn't that be fun?" she said on the UK's Graham Norton Show. "I'd love to do that but I don't know if there is any plan for it."

All we need is for Streep to sign on and we're golden. Anybody want to start a petition?