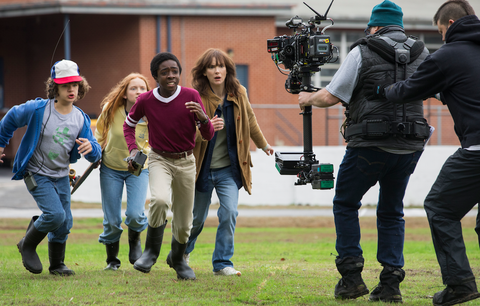 Stranger Things 2 wrapped up with Eleven safe and sound in Hawkins after closing the gate that leads into the Upside Down and suffering a massive double nose bleed as a result (someone please check her iron levels). But, if you watched the final moments of the season, it's clear that the Upside Down is still very much out there—and will doubtless make a sinister return in Stranger Things Season 3.

And as of March 20, we have a new official trailer that gives a lot more info on what to expect (but, of course, it's more style than spoiler). Over The Who's "Baba O'Riley," we see montages of Eleven at the mall, teen make-outs, first jobs at ice cream parlors and public pools, and some classic, 1980s-style summer fun. Of course, we also see Eleven battling monsters, and hints that the Upside Down is still watching everyone—as are some government-looking agents, who we see toting guns and stalking...someone? Obviously the details are mum. Check it out:

Scroll down for a catch-up on the last few seasons, and some more details about what we know.

Obviously, not too much will be known about the plot of Stranger Things 3 until it premieres on July 4, 2019. But judging from this quote from Ross Duffer, we've known for awhile that the gang won't be leaving Hawkins just yet: "If we're able to, there will be at least four, there could be more. I think there's going to come a point where, why aren't these people leaving Hawkins? Like, we're going to stretch credibility. It wasn't intended to be a seven-season thing."

We also know that there will be a full-year time jump between Season 2 and Season 3, thanks to Matt Duffer telling The Hollywood Reporter, "Even if we wanted to hop into the action faster, we couldn't. Our kids are aging. We can only write and produce the show so fast. They're going to be almost a year older by the time we start shooting season three. It provides certain challenges. You can't start right after season two ended. It forces you to do a time jump. But what I like is that it makes you evolve the show."

When it comes to the Mind Flayer (AKA the spider-like monster from Season 2, who we maybe see in the new trailer), we might not get a satisfying conclusion just yet: "We have our Upside Down document which describes its rules and its mythology in quite a bit of detail, but I think we're just going to slowly parse that out, and maybe not even fully use all of it."

That said, the Mind Flayer now knows that Eleven exists (and that she has powers), so she'll likely become a target. Per the Duffers: "They’ve shut the door on the Mind Flayer, but not only is it still there in the Upside Down, it’s very much aware of the kids, and particularly Eleven. It had not encountered her and her powers until that final episode. Now, it knows that she’s out there."

We also know that there other children like Eleven wandering around the United States with casual super-skills. Last season we met Eight, and we can expect to meet more random numbers in future seasons. "I think we've clearly implied there are other numbers, and I can't imagine that the world will only ever know Eleven and Eight," says executive producer Shawn Levy.

In other news, don't expect Season 3 to spotlight Will (bless his poor heart), as Matt Duffer told The Hollywood Reporter, "Maybe now we're going to give him a break." Don't know about you, but we'd love to see this season focus on Lucas. Or his amazing sister.

During MarieClaire.com's interview with Sadie Sink, we learned that filming Stranger Things 2 took a solid eight months. The cast is still doing press, so it's unlikely that Netflix secretly started production on the second season without telling anyone.

From the trailer, it looks like Stranger Things' core cast all return for Season 3, and we're especially thrilled to know that fan-favorite Priah Ferguson (who plays Erica Sinclair) will be in the show next season—with a bigger role. "There will definitely be more Erica in Season 3," Ross Duffer said. "That is the fun thing about the show—you discover stuff as you’re filming. We were able to integrate more of her in, but not as much you want because the story already going. 'We got to use more Erica'—that was one of the first things we said in the writers' room."

We'll also see more of Billy, Max's evil step-brother who has a passion for denim and mullets: "I can't speak for anybody else, [but] because of this big cliffhanger for Billy, there were a lot of discussions about a continuation and a past," Dacre Montgomery told PopSugar. "Like, where he's come from came later in the game, and then, where he's going became a discussion near the end of filming, for sure." In the new trailer, for example, we see he's now working at a public pool and still rocking a mullet. Still unclear how we feel about that guy.

When it comes to new blood, the Duffers seem hesitant to cast too many more people for Season 3: "We started introducing these characters, whether it was Bob or Kali or Billy and Max, but we already had so many characters, and then you fall in love with new people like Erica, who plays Lucas’ sister, and it really becomes this balancing act of making sure everyone gets their time. We want to continue to develop the characters that we already have come to know and love, so I think that’s what we’re figuring out moving into Season 3: What do we have time for, and can we also get to know our characters better who have been there with us since the beginning?"

Related Stories
The Best Silk Robes Out There
Sophie Turner, Icon, Is a Wine-Chugging Champion
On-Sale Pieces You Can Wear in Early Spring
Mehera Bonner Contributor Mehera Bonner is a news writer who focuses on celebrities and royals—follow her on Instagram.
This content is created and maintained by a third party, and imported onto this page to help users provide their email addresses. You may be able to find more information about this and similar content at piano.io
Advertisement - Continue Reading Below
More From Culture
'The Undoing' Season 2: Everything We Know
Cute Gift Ideas for Every Woman in Your Life
Advertisement - Continue Reading Below
'The Undoing' Differs Sharply From the Book
'The Undoing' Is Packed With Stars
Differences Between 'The Undoing' Book and Novel
It's Been a Weird Year for 'The Bachelorette'
Did Princess Diana Really Dance to 'Uptown Girl'?
'Bachelorette' Frontrunner Brendan Is an Actor
Everything We Know About Matt James
Zac Clark Could Be a 'Bach' Frontrunner