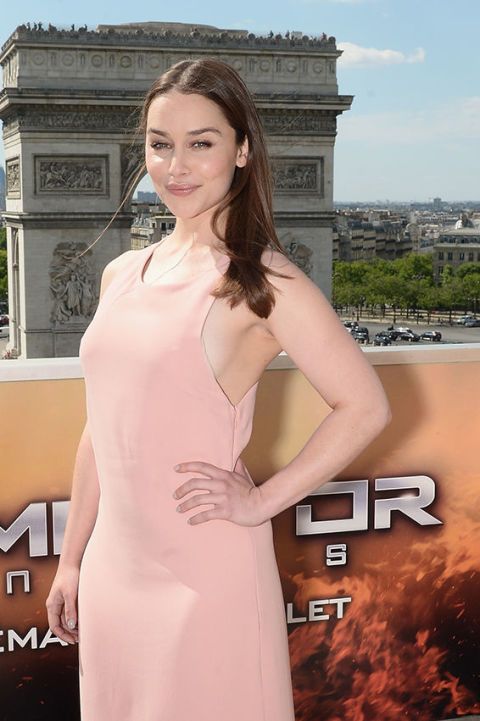 We've heard about the "modesty sock" used in Hollywood sex scenes, but the pink and fluffy sock? That's a new one.

Game of Thrones favorite Emilia Clarke—who reigns as mother of dragons Daenerys Targaryen on the hit HBO show—shared a behind-the-scenes secret while visiting The Graham Norton Show on June 19. The actress had to film some very dark and often violent sex scenes during Season 1 when her character belonged to Dothraki warlord Khal Drago, played by Jason Momoa—and it was Momoa's sense of humor that got them through it.

"He decided for one of the scenes, which was on his back and my face, he decided not to use a modesty sock, but to use a beautiful, pink fluffy sock," she says. "So getting that close-up from me looking petrified and just like I didn't want it to happen, was just lots of laughter— 'It's huge, and it's big, and I don't know what to do with it!'"

The star was joined by Cara Delevingne, Jake Gyllenhaal, and her co-star in the upcoming Terminator: Genisys, Arnold Schwarzenegger, who all got a big laugh from the image of Momoa's intimidatingly brute Drago donning anything pink or fluffy.

"A little bit of whiskey, and he's very funny," she joked.

This content is imported from YouTube. You may be able to find the same content in another format, or you may be able to find more information, at their web site.
This content is created and maintained by a third party, and imported onto this page to help users provide their email addresses. You may be able to find more information about this and similar content at piano.io
Advertisement - Continue Reading Below
More From Culture
See Inside Julianna Margulies's Personal Library
Could 'Manifest' Come Back for a Fourth Season?
Advertisement - Continue Reading Below
The Most Unmissable Movies of 2021 (So Far)
The Eternal Sunshine of Juno Temple
Let's Talk About That 'Virgin River' Cliffhanger
Zendaya Shared a Teaser of 'Euphoria' Season 2
'Ginny & Georgia' Season 2: Everything We Know
Wait, Where's Hope in 'Virgin River'?
'Virgin River' Season 4: Everything We Know
The Greatest Comedy Series of All Time