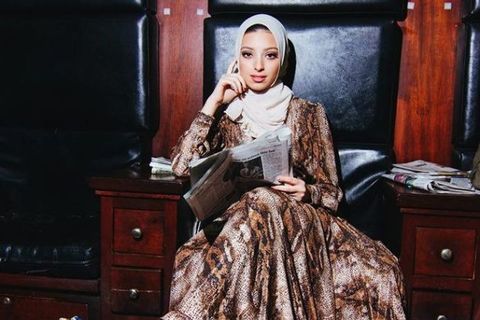 As an intern shadowing a reporter at ABC7, Noor Tagouri asked one of the anchors if she would pose for a picture with her. The ensuing Facebook photo went viral soon after—and she learned that the image of a hijab-wearing journalist still catches people by surprise.

Today, Tagouri, 22, has earned a significant online following through the #letnoorshine campaign, and has become a well-known public speaker on the experience of being Muslim-American. As Islamophobia remains at an all-time high, Tagouri's professional visibility feels particularly necessary.

Marie Claire: What made you want to become a journalist/anchor and how did you get there?

Noor Tagouri: I graduated high school at 16, which is also when I impulsively started wearing the hijab. I didn't grow up wearing it and never thought I would. But I was going through an identity crisis at the time, and asked myself why I wasn't happy with who I was.

I've dreamt of being a reporter since I was 8 years old and I decided to still stick by that dream—with my hijab on! I think that had I not worn the hijab, I wouldn't have worked as hard as I did, because I knew that it would be a bigger challenge. Since I graduated college [early], I gave myself that time to [be] rejected from TV stations so I wouldn't be behind.

MC: How close are you to reaching your dream?

NT:  I just recently quit my job as a TV reporter for CTV. I wasn't really digging the stories I was covering, and I didn't feel like I was maximizing my potential. But I am still a part-time associate producer for CBS Radio. I just got signed with Keppler Speakers as a [guest and motivational] speaker. I'm also working on independent stories for my YouTube channel.

I'm still figuring out who I am as a storyteller. But the biggest thing I'm working on I'm not allowed to talk about yet, but I can tell you that you'll be seeing me on TV soon!

MC:  What's the story behind your hashtag #LetNoorShine, and the CBS photo that went viral?

NT: As an intern for CBS, I would shadow the anchors. I sat down at the desk and a friend snapped the photo. At the time, I was reading Jack Canfield's book, The Success Principles. He talks about making your dreams a vision that you could look at every day, and that picture was something like that [for me].

That night, I posted that photo as my Facebook profile picture and wrote, "This is what my dream looks like." I got such a huge response and I realized that I had to do something with this. So my cousin and I decided to come up with a hashtag, and she suggested #LetNoorShine. My name Noor means "light," so [it would be about] inspiring others to let their lights shine. The idea was that the color of my skin, what I'm wearing on my head, my sex, my sexual orientation—none of that will stop me!

MC: What's an example of when your hustling really paid off?

NT: I hounded a CNN writer into answering some questions I had about the industry via email. He kept saying he didn't have time to respond, but I was persistent. Eventually we met for dinner and he showed me around CNN. He ended up being my professor two years later, and became one of my good mentors and friends. When you put yourself out there, people respond. Annoying people get shit done, and they go places.

"Annoying people get shit done, and they go places."

MC:  Your industry is tough—all about connections—and very white-dominated. What kind of obstacles have you faced being a Muslim journalist, and as a woman who wears a hijab?

"There have been moments where people have harassed me, shoved their hands in my face, and said 'I don't talk to people like you,' or 'The way you're dressed terrifies me.'"

While I was working at my last TV job, two of my photographers were black with dreads. We'd call ourselves the "best worst" team, because it takes a much longer time to get strangers to talk to you when you're a hijabi and a black person with dreads than if you're a white reporter and white photographer. That's kind of the the blunt truth of the matter. But it's always an adventure nevertheless.

MC: Are you actively trying to change the perception of Muslims in America? Especially at a time like this, when Islamophobia remains so rampant?

NT: I'm not doing it in an in-your-face way. But I am very vocal and active with what I'm doing, which is normalizing the image of Muslim women. Simply being badass, staying true to my faith, and refusing to be afraid—that's the key, in my opinion.

MC: What's your message to other Muslim women, or to anyone who doesn't seem to fit the mainstream, when it comes to going after your dreams?

NT: Use your differences to your advantage. We live in such an incredibly diverse world. Different really is beautiful.