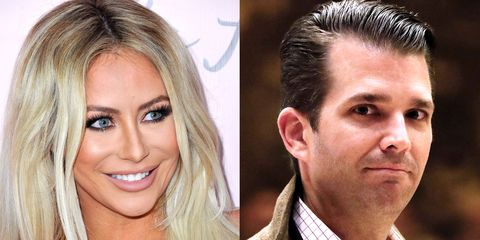 Just days after his wife filed for divorce, a new report has emerged that Donald Trump Jr. may have smushed Danity Kane Star Aubrey O'Day back in 2011. According to Page Six, a source has revealed the two had an affair during the filming of Celebrity Apprentice.

Trump Jr. "pursued [Aubrey]. It was him who chased her," a source told the site. "He told her that his marriage was already in the process of dissolving." At the time, his wife, Vanessa, was pregnant with their third child.

According to Page Six, Don Jr. told Vanessa that he planned to leave her for O'Day, but Trump Sr. stepped in and told him to "knock it off." Effective!

Five years later, O'Day mysteriously did the tell-tale tweet-and-delete on election night, posting: "My story I didn’t tell is worth millions now." TELL US, AUBREY!

But per Page Six, the Danity Kane singer took the 2011 breakup hard, which the paper revealed in a magnificently shady way:

However, sources say that O’Day was truly in love with Don Jr., that she never sought money either to tell her story or to keep quiet, and that she was never paid by the Trump family. Suggesting an unusual taste in men, she later went on to date “Jersey Shore” star Pauly D.

Honestly, the perfect way to address the whole thing.

Meanwhile, Vulture has raised the question of O'Day's 2013 banger "DJT," a song about an ex that may or may not have the same initials as her maybe or maybe not ex-boyfriend Donald Trump Jr. Below, the lyrics via Genius.

Whatever the truth is defines the reality of you and I forever
And I need to be able to define that before I can walk away
I thought it was forever at the time but maybe I was lying to myself
Is that what you want?
You want to believe that everything with me was a lie? A fantasy?
And you want to go back and live in the life that you had have forever?
I don't know, I couldn't do what I said I would do
So that answered the question for me
I'll always want you and always wonder about it
But it doesn't matter because I have to stay here
What made you stop believing in our world?
You know, I think probably the loss of the other world
I'm torn between two worlds both of which I wanted

Tell me you love me, I need you to do that
No, you don't
Yeah I do, I need to know it before I walk away
No, that's exactly what's stopping you from walking away
No it wouldn't, that's exactly what would help me walk away
You know everything anyway
You're the only one who ever knew my heart
I have to move on, I need your help
I can't believe that this was all a lie
You have to tell me you love me
I don't 'cause you're a fucking pain in my ass
Tell me you love me and I won't talk to you anymore
I'll leave you alone
Look, it doesn't matter, it can't matter
The truth will only kill us both
You have to say it once to yourself and to me and then I'll go
I love you
Talk to you later

Just another day, another drama! 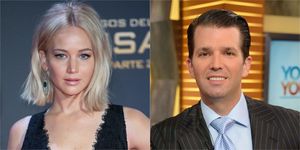 Donald Trump Jr. Has Beef with Jennifer Lawrence
This content is created and maintained by a third party, and imported onto this page to help users provide their email addresses. You may be able to find more information about this and similar content at piano.io
Advertisement - Continue Reading Below
More From Culture
'The Great British Baking Show' Is Coming Back!
'Bachelor In Paradise' Spoilers: Your 2021 Guide
Advertisement - Continue Reading Below
'Bachelor In Paradise' 2021: Everything We Know
Films With Plot Twists You'll Never See Coming
Mimi Keene Stole the Show in 'Sex Education' S3
'Virgin River' Season 4: Everything We Know
Watch the 'The Morning Show' Cast Play Trivia
Fans Are Already Clamoring for 'Sex Education' S4
Gina Yashere Shares Her Fav Black Female Authors
The 69 Most Graphic and Gorgeous Sex Scenes on TV