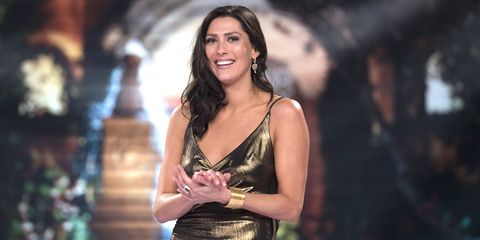 After suffering through what might have been the most devastating and WTF breakup in Bachelor history, Becca Kufrin is bouncing back and looking for love again as the next Bachelorette. Becca will lead the spinoff's fourteenth season. Here's everything we know so far.

1. Becca has an amazing catchphrase.

On April 18, ABC revealed the key art for Becca's season of The Bachelorette—and it certainly makes a statement:

It's something Becca said frequently throughout her time on Arie's season—including when she met his parents—and seems to be something of a mantra for the confident brunette. It also appears in her Instagram bio. "Let's do the damn thing" indeed, Becca.

Filming for Becca's season began on March 15 and The Bachelor franchise creator Mike Fleiss commemorated the occasion with a series of tweets from set. Becca wore a gorgeous white, beaded gown for the first night of filming.

Not only did the behind-the-scenes pictures have a very UnREAL vibe, they also captured some of the moments of Becca meeting her potential loves for the first time—including someone in a chicken suit.

There are pictures of him and Becca hanging out one-on-one in Park City, Utah, where the group traveled for their first non-L.A.-based excursion of the season.

4. The group traveled to Las Vegas.

In early April, Becca and her guys traveled to Vegas (but, considering all the cameras, whatever happened there will not stay there).

5. The first non-U.S. trip of the season was in the Bahamas.

Becca was reportedly "all smiles" while filming in Nassau, Bahamas, in April.

The Bachelorette put Becca up in style during the trip. People reports that she stayed at a luxury resort: the $4.2 billion development, Baha Mar. If anyone deserves some luxury R&R, it's Becca.

6. The season premieres in late May.

We still have a little while to wait before we get to see how Becca's fairytale plays out (hopefully with a happily ever after that lasts this time). Season 14 of The Bachelorette premieres Monday, May 28 at 8 p.m. ET on ABC.

Related Story
Channing Tatum Hung Out with Arie Luyendyk Jr.
Kayleigh Roberts Contributor Kayleigh Roberts is the weekend editor at Marie Claire, covering celebrity and entertainment news, from actual royals like Kate Middleton and Meghan Markle to Hollywood royalty, like Katie Holmes and Chrissy Teigen.
Advertisement - Continue Reading Below
More From Culture
The Best New Music of 2020 (So Far)
Listen Up: Gripping New True Crime Podcasts
Advertisement - Continue Reading Below
'The Bachelor' Has Already Finished His Season
Unmissable Horror Movies Coming Out This Year
Who Is 'Bachelor' Peter's Mom Talking About?
Sarah Coffin Might Be a 'Bachelor' Frontrunner
Who Is 'Bachelor' Contestant Victoria Fuller?
Meet the Star of 'The Bachelor's ChampagneGate
Jurnee Smollett-Bell Is a Real Life Superhero
The Best Love Songs to Ever Exist