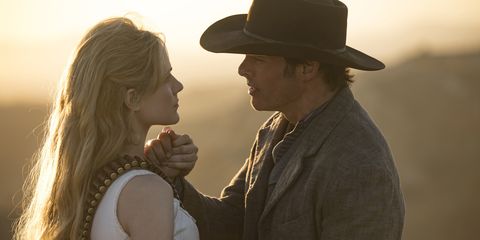 Westworld Season two has barely begun and, yet, we are already looking ahead to Season three. This current season promises to bring us the robot uprising—but where could the show possibly go from there? Here's what we know so far.

Brace yourself for some bad news: There's a very real chance that Westworld Season 3 won't air until 2020. During an interview with Entertainment Weekly, creators and showrunners Jonathan Nolan and Lisa Joy hinted at a repeat on the 18-month gap between seasons.

"It's an ongoing conversation with our friends at HBO, and for us, with a show of this scope and scale, we're not interested in doing the compromised version," Nolan said. "We want the show to get bigger and bigger and more ambitious and this takes time. We want to take all the time we need to get it right."

On a show like Westworld, it's hard to predict who will be around from season to season—characters die, characters who we thought were dead return. But we can bet on two of the main cast members returning: Evan Rachel Wood and Thandie Newton.

Last week, news broke that Wood will be paid the same as her male costars in the hit show's third season.

"I was just told that, you know, 'Hey, you’re getting equal pay.' And I almost got emotional. I was like, 'I have never been paid the same as my male counterparts…never, never.' I’m always fighting for that," she told the Wrap. "Westworld, it’s like, I get it a little more. It’s like, 'Well, you’re Anthony Hopkins or Ed Harris.' But I think now we’re all doing equal amounts of work and really hard work."

Days later, Newton confirmed that she, too, would be paid the same as Westworld's male stars in Season three.

"They’re all happening right now, and yeah, we’re all equal across the board," Newton told Vanity Fair. "It’s really exciting. It’s unprecedented. It’s...goodness, it shatters so much calcified pain, resentment, frustration. It just shatters it."

Related Story
Biggest Questions After the 'Westworld' Premiere
This content is created and maintained by a third party, and imported onto this page to help users provide their email addresses. You may be able to find more information about this and similar content at piano.io
Advertisement - Continue Reading Below
More From Culture
What Makes an Olympic Moment?
Team USA Fencers Protested Their Teammate
Advertisement - Continue Reading Below
Hang On, What's "ROC" at the Olympics?
Suni Lee Just Scooped Up Gold in Tokyo
Movies Everybody Should Watch At Least Once
'Virgin River' Season 4: Everything We Know
'Love Is Blind' Season 2 Is Coming!
Simone Biles' Sister Is Her Fiercest Champion
Simone Biles Quotes to Live By
Could 'Manifest' Come Back for a Fourth Season?